Cautious News for the Possible Increase in Florida Manatee Population? 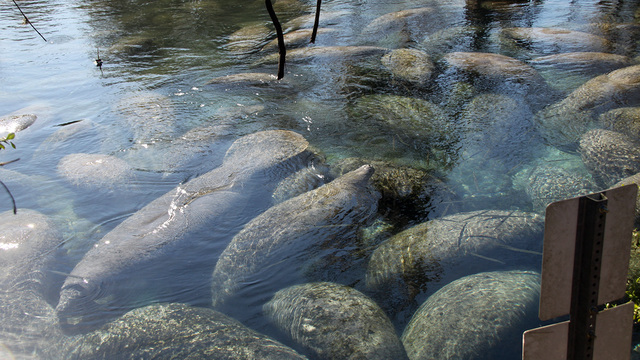 Manatees at Three Sister Springs Stay warm as Gulf of Mexico cools down for the winter. FWC Photo

In this blog, I have both good news and bad news for you. The good news is that a new study from biologists with the Florida Fish and Wildlife Conservation Commission and the U.S. Geological Survey used data collected during aerial surveys in 2015 and 2016, combined with statistical estimation methods, to come up with a new estimate for the state’s manatee population. This study found that the Florida manatee population “is now between 7,520 and 10,280.” This is excellent news and a wonderful increase, especially when you compare it to the 2011/2012 population data of 5,680 – 8,110 Florida manatees.

However, you should take caution and not look at these new numbers as a population boom. Why? Because in 2018,“117 manatees have been run over by speeding boaters— up from 102 in 2016 and 104 in 2017.” Add to the sobering news that Red Tide has been blamed for “the deaths of 207 manatees in 2018. Of those, 91 have been conclusively linked to the Red Tide toxin and another 116 are still awaiting laboratory test results but show the symptoms of being poisoned by the algae.”

Red Tide can be an unusually persistent and harmful algal bloom. It is currently still affecting parts of the west coast of Florida. Red tide is caused by Karenia brevis algae and it produces toxins that can kill fish, manatees, sea turtles, birds and dolphins. In 2018 there was even a giant whale shark that died from Red Tide.

According to Jeff Hostetler, as a research scientist at the Florida Fish and Wildlife Research Institute in St. Petersburg, Florida, “we’re definitely not encouraging people to make any statements of a population increase because it’s not certain.”

In a Florida news release about the study’s findings, state officials contended that the new estimate “contributes to the conclusion that conservation measures … continue to create an environment that allows the manatee population to recover.”

Hostetler continued and said, “The study is the first new estimate of manatee abundance in five years. And scientists may try to repeat the study in 2020 or 2021, but that’s not guaranteed at this point.”