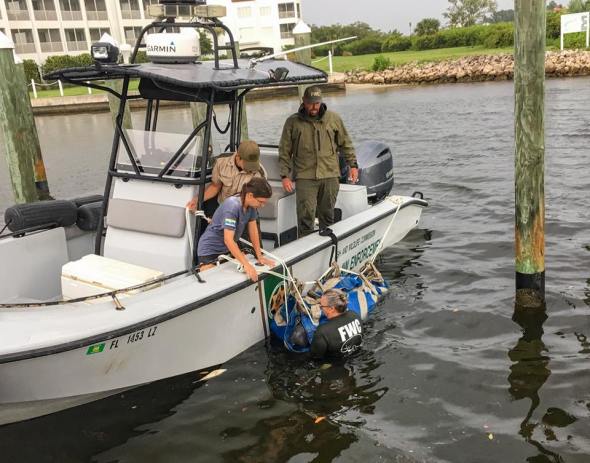 Greetings! You’ve probably heard me talk about how we manatees have “no enemies.” Well – that’s right; alligators, sharks, and all marine life bring manatees no harm at all. However, every so often an unfortunate event happens, usually in the warm Gulf of Mexico, which is called Red Tide.

Red Tide is a manatee’s enemy because its toxicity could kill us very quickly! You see red tide is an extremely toxic algae bloom that forms when the water is warm and there are plenty of nutrients for it to live on. And that is exactly what’s been happening along, at minimum, 120 miles of Florida’s Gulf of Mexico coast, which started in November 2017. Add to this, more sobering news that scientists say these red tide blooms, “most likely will last until 2019.”

They also said that, “nearly 300 sea turtles have died because of the toxic bloom. Pelicans, manatees, and a whale shark have also washed ashore since this unprecedented bloom started.”

Lt. Col. Jennifer Reynolds, deputy district engineer with the Army Corps told angry Cape Coral, Florida talked to angry southwest Florida residents and explained they had to release “nutrient-laden water from Lake Okeechobee when the level of the lake approaches 15 feet above sea level, because a major rain event could lead to catastrophic flooding around the lake and the loss of lives and property.”

Michelle Kerr, spokesperson for the Florida Fish and Wildlife Conservation Commission’s Fish and Wildlife Institute said, “The release of nutrient-laden water from Lake Okeechobee, combined with high temperatures have triggered this toxic algae bloom unlike anything southwest Florida has ever seen. FWC staff have been out in the field to confirm species identification and location, estimate of number dead fish and obtain samples from fish carcasses.”

The FWC reported their first recorded event “of a marine mammal die-off caused by red tide occurred off the southwest coast of Florida in 1946.”

Red tide blooms occur naturally in the Gulf of Mexico and the algae colonies are usually very small. However water quality experts explain, “it is the nitrate pollution flowing from Lake Okeechobee, along with over-fertilized yards and leaky septic tanks” that fuel the blooms’ explosive growth.

The Florida Marine Mammal Pathology Laboratory located in St. Petersburg said, “the bloom is suspected of killing 92 manatees, including 12 in this past week.”