How can it be that insanely small microscopic algae called Karenia brevis, known as red tide, has the ability to kill hundreds of large majestic manatees in a very short period of time? It’s because of the deadly toxin they produce which is known as brevetoxin. 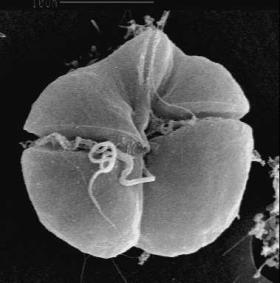 These harmful algal blooms called HABs come together when the algae in the water suddenly begin growing out of control. Think of it as an underwater volcano exploding and releasing all of its debilitating effects in all directions, even into the air. That is when manatees, other marine mammals, fish, shellfish, birds and people become exposed to the toxins. In rare cases HABs can even be fatal to humans.

Unfortunately, one of the locations for HABs occurs right along Florida’s Gulf Coast. It’s usually during the spring and summer months when this raging algae growth occurs, however red tide organisms are found in Florida’s waters every month of the year.

Like the name indicates, the water can turn an intense red when HABs are active.

For the last several years, the scientists at the National Ocean Service have been monitoring and recording HABs. They are trying to learn more about actually forecasting bloom locations so they can warn communities of the upcoming environmental consequences brought on by red tide.

2013 – A Catastrophic Year For the Florida Manatee

The death of 829 manatees off the coast of Florida in 2013 set a new record ever since biologists began keeping track of this endangered species.

Generally, in an average year about 300 to 450 manatees die of old age, watercraft strikes, or disease. But last year was extremely baffling. What caused such in increase in red tide?

Pat Rose, executive director of the Save the Manatee Club, in Maitland, Florida feels that these high mortality rates are growing because the occurrence of red tide is growing. Rose believes the increase runoff of nutrients into the marine waters such as fertilizers are definitely a possibility. Rose said, “We can talk about whether the population will recover, and I certainly believe and hope so, but we can’t afford too many of these records.” He goes on to say, “Probably we’re down at least net ten percent, and it could be significantly more.”

During the period from 2010 to 2013, there were approximately 900 more manatee deaths than expected. The causes included; red tides, cold weather, and some other mysterious occurrences. There has been talk about changing the manatee status by moving them from endangered to threatened. “It would be absolutely wrong to move forward with the downlisting without factoring in the extremely high mortality over this three-year period,” says Rose.

Clearly, with these last few years of higher than normal manatee mortalities, there is no reason to change their current endangered status.

Kobee Manatee and I are on a mission to educate and save the manatee’s while providing educational fun.  Join us!