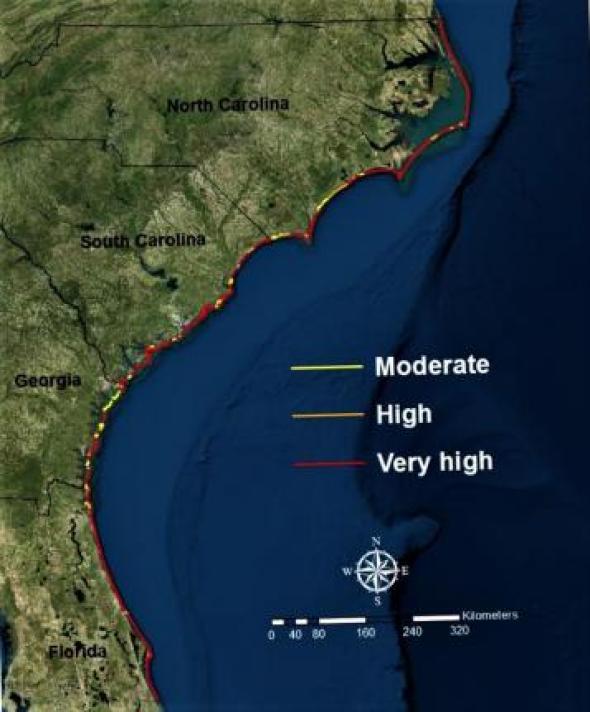 Greetings! Unfortunately, I have some sobering news on climate change. According to National Science Foundation researcher Dr. Betsy Von Holle, who recently published in the Journal of Wildlife Management…

… “Sea level rise is hitting coastal habitats along the south Atlantic Coast faster than scientists previously thought, threatening entire species of birds and whole ecosystems if action isn’t taken soon. More than 1,200 miles of coastline is projected to have an increase in coastal erosion vulnerability by 2030.”

Von Holle is affiliated with the University of Central Florida. Other educational institutions involved in the study include Virginia Tech. The research explained, “Fully 75 percent of the coastal area cited from Cape Hatteras, North Carolina, to Cape Canaveral, Florida is at high risk for erosion and flooding by rising seas and storm events. That is an increase from about 45 percent of coastal area found to be at high risk in a similar study published by the U.S. Geological Survey 20 years ago.”

This study is also accompanied by a map (above), which depicts high-risk zones marked in red. Looking at the map, it is evident that most of northern and central Florida’s Atlantic Coast is red. Von Holle told UPI, “We were surprised at the big jump in vulnerable areas. We’re not saying that these areas are all going away, but people should be aware of that when they are managing for these impacts.”

The study also reported, “In some areas, though, the only result might be a faster and higher buildup of sand dumped on beaches in multibillion-dollar beach renourishment programs. Such fixes are effective in the short term, but could be masking the growing crisis.”