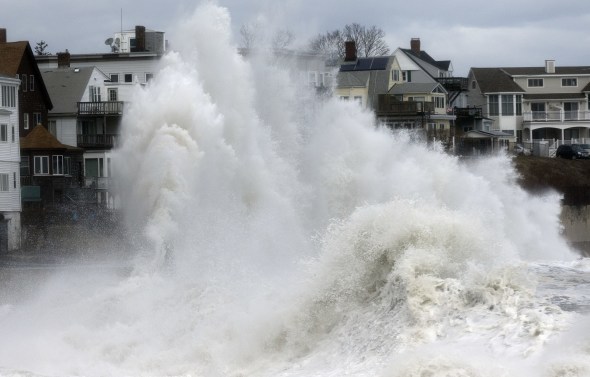 A huge wave barrels into a seawall in Winthrop, Massachusetts on March 3, 2018, one day after an intense nor’easter hit the Atlantic coast. Photo AP/Michael Dwyer

Greetings! Here’s another sobering blog about climate change and its effect on rising sea levels. There was a recent study done by researchers at the University of Oregon and the University of Wisconsin, which said that, “internet cables will be underwater in 15 years, and it’s not too late to stop it.”

Dr. Carol Barford, coauthor of the study explained she and her researchers knew they “would see some overlap in infrastructure and shoreline, but the timing surprised them.”She continued and said, “The main thing that we didn’t expect was that it would be so soon.”

In 2015 Dr. Barford’s two coauthors, Paul Barford and Ramakrishnan Durairajan created a study which mapped the entire internet infrastructure in the United States. When you compare the map from this previous study to the National Oceanic and Atmospheric Administration [NOAA] predictions of the future shoreline, it shows, “that New York City, Miami, and Seattle are at the highest risk.”

Dr. Barford estimates that, “about one-fifth to one-fourth of the fibers that make up the internet in New York city will be underwater on a normal day at high tide.” The study reports that, “CenturyLink, Intelliquent, and AT&T as companies that are at the most risk.” The main message from this study is that, “developing mitigation strategies should begin soon.”

While it is true that internet fibers were carefully designed to be water and weather resistant, “they were not designed to be underwater.” Dr. Barford explains, “The water molecules can seep into any micro-cracks of the tubes and into the glass fibers, causing signals to slow down or be lost. The movement of the signal is not as reliable when wet. Water can also damage the lines and nodes when it freezes in the tubes, thaws out and then repeats the cycle. The result is cracked or broken pieces. Lastly, water sloshing around in the conduit can jostle or break fibers.”

Dr. Barford continued and said, “Although things can change in the next century, the results are set for the next 15 years. Things happening in the next 10 to 15 years, they’re pretty locked-in because there’s a lot of inertia in the climate system. Even if we all stop driving cars and burning natural gas right now, it really wouldn’t make a difference 15 years from now. So we’re going to have flooded internet. The question is how to deal with it in the near term.”

The logical reason for using this third option model is because its prediction takes into account the effects of greenhouse gases on climate change. Dr. Barford explains, “It’s based on a business-as-usual greenhouse gas emission scenario, which the way we’re going seems a pretty likely thing for the next few years. We’re kind of doing business as usual, if not worse. It all seems very grim, but it definitely substantiates the idea that it’s worth looking at the more serious scenarios, and that there’s really no use to be optimistic in the near term.”

Dr. Barford said the sobering overview of rising sea levels due to climate change are from the effects of past greenhouse gas emissions “carrying over and catching up.” She added, “There’s a lot of heating and sea level rise that is just going to happen. And then hopefully we can get our act together and make the consequences less severe for people living later on in the century.”

As more news on climate change breaks, I’ll be sure to blog about it for you.