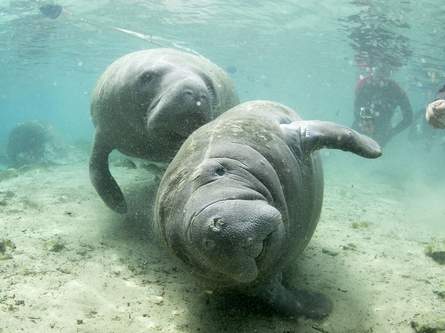 Manatees swim near the sanctuary at the entrance to Three Sisters Springs in Crystal River. ALAN YOUNGBLOOG / GATEHOUSE FLORIDA

Greetings! Today I want to talk about the extremely important topic of downlisting our manatee status from “endangered” to “threatened” by the Federal Government. On Monday, April 4th, U.S. Rep., Vern Buchanan’s office sent a letter to the U.S. Fish and Wildlife Service urging them to withdraw their proposal to downlist us manatee from our current endangered status to a threatened status. This past January, the agency began public hearings on its proposal and these hearings will come to an end on Thursday, April 7th.

The U.S. Fish and Wildlife Service contend since the manatee’s population has increased enough over the last few years, that the manatee “no longer qualifies as endangered.” It is the endangered status, which qualifies for the highest level of protection under federal law. Here are the definitions…

Threatened – at risk of becoming an endangered species

Proponents of the manatee downlisting argue that the federal agency has been very slow in responding to the manatees’ population increase. However, environmentalists argue that the marine mammal is still extremely vulnerable to habitat changes and boat strikes. Mr. Buchanan’s letter to the federal agency argued red tide and cold weather have caused hundreds of manatee deaths in a very short period of time. Buchanan stated, “ I’m concerned that weakening protections will lead to a decline in the manatee population. Manatees are iconic residents of Florida. We should be doing all we can to ensure the survival of these gentle giants.”

Mr. Pat Rose, Executive Director of the Save the Manatee Club in Maitland, Florida wrote his opinion of the manatee downlisting issue in the April 3rd Edition of the Herald-Tribune…

Throughout my 40 years as a professional aquatic biologist and most of my years as a student to become one, I have appreciated just how important manatees are to the health and welfare of our aquatic ecosystems. Therefore, it is especially disturbing to see such a misguided effort being made by the U.S. Fish and Wildlife Service to prematurely remove manatees from the endangered species list, while the threats and risks to them and the aquatic ecosystems upon which they depend are neither controlled nor likely to be in the foreseeable future as required by the Endangered Species Act.

While I can certainly appreciate that the manatee population has grown since it was first listed as an endangered species, the threats today are both great and increasing. The significance of recent losses of over a thousand manatees — to severe cold, red tide and still undetermined mortality events tied to the health of the Indian River Lagoon — was essentially ignored by the Fish and Wildlife Service in its recent flawed review of the manatees’ endangered status. Sadly, as I write this, more manatees have been killed by boats so far this year than in any other similar time period.

We only have to look closer at one of Florida’s most important treasures, the Indian River Lagoon. The northern lagoon is now in the throes of its second great assault from years of human-caused nutrient pollution that has led to another devastating round of brown tide and fish kills, and to the loss of vital seagrass habitat just as the system had begun to recover from the first devastating loss of thousands of acres of seagrasses and of manatees, dolphins and pelicans as well as many other species.

Consider also that the rest of the lagoon continues to be assaulted with uncontrolled local runoff and leaching from septic tanks, together with harmful surges of polluted freshwater from Lake Okeechobee.

Sadly, one must look very hard to find any good news when it comes to the state of our aquatic ecosystems in Florida, where the St. Johns and Caloosahatchee rivers and Florida Bay are facing similar assaults. Even our priceless natural springs and the aquifer, upon which they depend, are being over-pumped and threatened with future loss to both manatees, as vital winter habitat, and the myriad aquatic life similarly dependent upon them for survival.

What is especially disturbing, however, is that there is an organized effort by a powerful and richly funded anti-endangered-species group to prevent the manatees and our aquatic ecosystems from receiving the protections they must have before we are too far past the tipping point to recover them. They are so desperate to strip away what protections exist that they dare to blame the brown tides and seagrass losses on the manatees, ignoring the science that ties the problems directly to the years of uncontrolled growth and pollution from our growing human population.

By way of caution, when considering how to reverse these years of uncontrolled pollutants from a variety of sources, it can be tempting to rush to remove the ugly dark muck, thinking it will be a solution to the problem — when doing so in a reckless manner will actually place our ecosystems in even greater danger by feeding the growth and expansion of harmful algal blooms and fish kills.

Ultimately, unless we fix what is broken (eliminating the excess nutrient loading at their sources, and balancing the amounts and timing of freshwater entering these systems), the muck, algal blooms and fish kills will just come back.

I continue to be gravely concerned that prematurely removing the manatees’ endangered status at such a crucial time will make the task of restoring our aquatic ecosystems virtually impossible. There is no doubt in my mind that both the health of the manatee and the aquatic ecosystems are inseparable and increasingly vulnerable.

Please show your appreciation for manatees by joining me in opposing the downlisting of manatees from endangered to threatened, and demanding that Florida and the federal government restore our aquifer, springs, rivers and lagoons instead of giving in to those politically powerful and self-serving interests that want to continue to develop Florida in a way that will perpetuate the demise of our aquatic ecosystems and the species like the manatees that depend upon them.