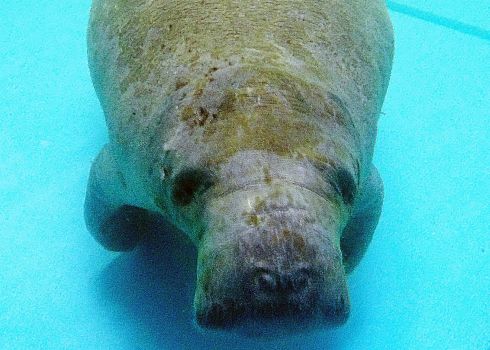 Here’s an update on Trinidad the Manatee. It was back in November 2014 when I told you he was rescued due to severe cold stress. His rescue took place in Trinity Bay, not far from Houston, Texas. Trinidad wanted to get back home to Florida; however, the cold air temperatures of November got the best of him. Trinidad weighed in at only 975 pounds when he arrived at SeaWorld in San Antonio, Texas. Veterinarians there estimated Trinidad to be around 20 years old.

During the first ten days of his rehabilitation, he was fed a “veggie shake” via a stomach tube. Then Trinidad was slowly able to eat about 50 pounds of lettuce per day. A nice improvement for my manatee buddy!

Earlier this week, Trinidad left his private pool and was gently put in a custom-made transport box for his plane ride back to Florida. The police escorted him to Port San Antonio’s Kelly Field where he left for SeaWorld, Orlando, Florida. On his flight, a small team of veterinarians accompanied Trinidad.

Chris Bellows, Vice President of Zoological Operations at SeaWorld said, “Man, I would like to travel to the airport that way. You could safely say dozens of people are involved in the entire movement.”

Congratulations Trinidad! And I welcome you home to Florida!