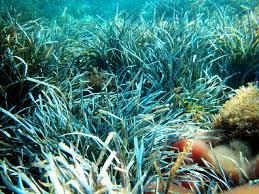 In the first Global Study of its kind by the Blue Carbon Initiative, researchers discover that the world carbon pool in seagrass beds is as much as 19.9 billion metric tons!

Greetings! In this blog I want to bring you some fascinating research news on the wonderful power of the manatee’s main food source – seagrass! According to Dr. Oscar Serrano, Post Doctoral Research Fellow within the Center for Ecosystems Management in the School of Natural Sciences at Edith Cowan University, “Seagrass can store carbon for centuries, millennia.” Add to that, in the First Global Study of its kind by the Blue Carbon Initiative, researchers discover that the world “carbon pool in seagrass beds is as much as 19.9 billion metric tons.”

As you know, I’ve been blogging about climate change, ocean acidification, and global warming recently. And now with this awesome research news from the National Science Foundation about seagrass meadows and how they can sponge up an incredible amount of dangerous carbon levels is extraordinary! In fact, according to Science Daily, looking at “per unit area, seagrass meadows can store up to twice as much carbon as the world’s temperate and tropical forests.”

The paper, Nature Geoscience, where this research comes from, explains that “seagrasses are a vital part of the solution to climate change …” The paper goes on and states that “…coastal seagrass beds store up to 83,000 metric tons of carbon per square kilometer, mostly in the soils below them. For comparison, a typical terrestrial forest stores around 30,000 metric tons per square kilometer, most of which is in the form of wood.”

The paper estimates that, “… although seagrass meadows occupy less than 0.2 percent of the world’s oceans, they are responsible for more than 10 percent of all carbon buried annually in the ocean.” The paper’s lead author, Dr. James Fourqurean, professor of biology at Florida International University and scientist with the Blue Carbon Initiative said, “ Seagrasses only take up a small percentage of global coastal area, but this assessment shows that they are a dynamic ecosystem for carbon transformation.” Dr. Fourqurean continued and said, “Seagrasses have the unique ability to continue to store carbon in their roots and soil in coastal seas. We found instances where particular seagrass beds have been storing carbon for thousands of years.”

Moreover, the study explained, “… seagrass meadows store ninety percent of their carbon in the soil and continue to build on this for centuries. In the Mediterranean, which is the geographic region with the greatest concentration of carbon found … seagrass meadows were found to store carbon in deposits many meters deep.”

Unfortunately, I must tell you there is a downside to all this awesome news about seagrass meadows …

… According to the study, “Seagrasses are among the world’s most threatened ecosystems. Roughly 29 percent of all historic seagrass meadows have been destroyed, mainly due to dredging and degradation of water quality. Furthermore, at least 1.5% of seagrass meadows are lost every year.” The study also estimated, “… that emissions from destruction of seagrass meadows can potentially emit up to 25 percent as much carbon as from terrestrial deforestation.” The study’s coauthor, Karen McGlathery, Professor, University of Virginia said, “One remarkable thing about seagrass meadows is that, if restored, they can effectively and rapidly sequester carbon and reestablish lost carbon sinks.”

In addition to the main food source for us manatees, seagrasses are recognized for their enormous ecosystem benefits…

Dr. Bill Dennison, Vice President for Science Applications at the University of Maryland Center for Environmental Science said, “The results of this global analysis emphasizes the importance of seagrass conservation and restoration. In addition to providing habitats and nurseries for fish and shellfish and stabilizing sediments to reduce erosion, we now know that seagrass meadows have a crucial role in regulating global carbon.”

Dr. Emily Pidgeon, Senior Director of Strategic Marine Initiatives at Conservation International and co-chair of the Blue Carbon Initiative said, “Our vital seagrass ecosystems have always been a conservation priority, given their myriad benefits of ecosystem services to local communities. Now we must also recognize the vital importance of Coastal ‘blue’ carbon ecosystems, such as seagrass meadows, for their importance to global climate health.”

Stay tuned for more of my blogs on the extraordinary power of seagrass – my number one favorite food!