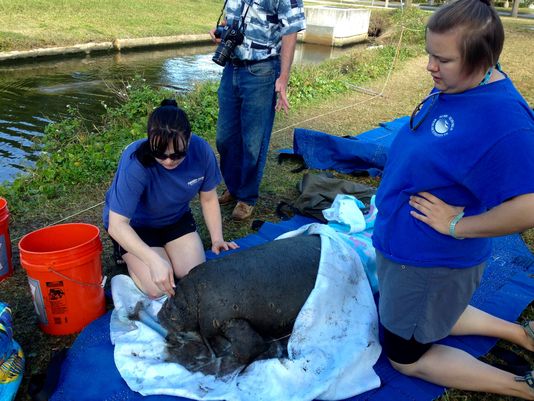 Great News! One of my manatee female friends and her calf were rescued from the Satellite Beach canal due to cold stress!  They were taken to Tampa’s Lowry Park Zoo by the Florida Fish and Wildlife Conservation Commission (FWC) for rehabilitation and treatment. Ann Spellman, an FWC marine mammal biologist, talked about the Satellite Beach manatee rescue and said,“They don’t know you’re trying to help them. And they’re like horses — they’re extremely strong. They spook easy. And they’re just trying to get away from you. So they give us quite a fight.”

Ms. Spellman estimated that the calf had a length of five feet and weighed around 200 pounds and its mother weighed around 1,600 pounds. The FWC watched both manatees for three hours a day. As time went on, they noticed the calf had become disoriented and developed exterior sores. Spellman explained, “While it’s not a brutal winter, it’s definitely enough for these small animals to suffer from exposure.”

Dan Levine, another marine biologist with the FWC said, “If a manatee calf can be in captivity with its mother, we can release the calf as soon as it’s healthy within a few months. If we have to orphan a calf, it has to remain in captivity for up to four or five years.”

I’m rooting that both of my manatee buddies can leave the Lowry Park Zoo in just a few months!

Here’s another awesome link to learn more about us manatees …