My Florida Manatee Buddy – Trapped in a St. Petersburg Spillway! 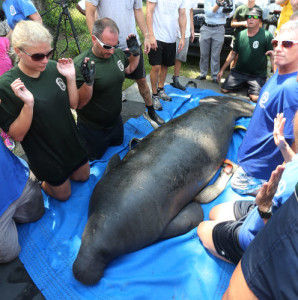 I just got the news while swimming in the Atlantic Ocean off of Miami that one of my manatee buddies became trapped in a spillway. It happened in St. Petersburg, Florida near 37th street.

He was trying to clear the low cement barrier so he could get into the waters of Clam bayou. It’s not easy for us manatees to climb over a cement wall!

My good friends from the Florida Fish and Wildlife Conservation Commission, along with some volunteers from the Clearwater Marine Aquarium came over to rescue him. After several hours of gently moving him with nets, they put my buddy into a van and drove him to Maximo Park where they released him into Tampa Bay. A great ending for all!