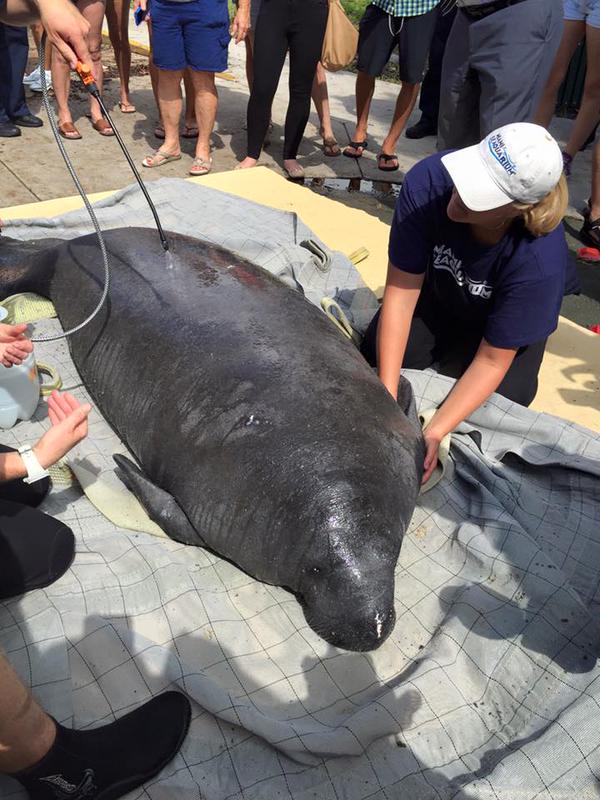 Here’s great news for you! Today, my manatee buddy Piper, was released back into the wild from the Miami Seaquarium! It was back In May, some five months ago, Piper became trapped in a pump station in the New River, located in Fort Lauderdale. City workers there actually discovered the female manatee that was stuck in a gate.

The manatee rescue took some two-hours and was headed up by the Florida Fish and Wildlife Conservation Commission. During Piper’s rescue, water was drained out in order to isolate her. Once the water was out of the pump and gate area, the Fort Lauderdale Fire Rescue Divers attached a crain hoist, which safely got Piper back on the ground. From there she was transported down to the Miami Seaquarium located in Key Biscayne, Florida.

The Miami Seaquarium said when they received Piper from her rescue in May, she had “suffered scrapes and abrasions to her face, flippers and body.”  During her rehabilitation at Miami Seaquarium, Piper was administered antibiotics along with medications for parasites. She also weighed in at 300 pounds when she arrived. The staff also determined she was about one year old. Today Piper weighs in at a healthy 500 pounds. And she sure was ready to go back into the wild!

The Miami Seaquarium consists of 38 acres and is located on the island of Virginia Key, very close to downtown Miami, Florida. In addition to manatees, the park also contains fish, sharks, sea turtles, birds, and reptiles. It is estimated that some 500,000 people visit the Miami Seaquarium each year.

The Miami Seaquarium is part of the Manatee Rescue and Rehabilitation Partnership. The following Florida facilities are also included in the partnership; SeaWorld in Orlando, Homosassa Springs Wildlife State Park, Lowry Park Zoo, and the Dolphin Research Center. However, the only facilities authorized for critical care and the rehabilitation of an injured, sick or orphaned manatee are; the SeaWorld Orlando, the Miami Seaquarium, and the Lowry Park Zoo.