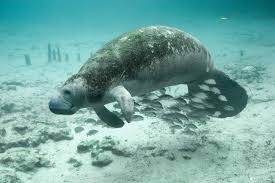 In all of his 30 years on the water there Mr. Farner explained, “I said to myself: ‘You’ve got to be kidding me.’” Guess what he was looking at? A manatee! Yes, there have been at least two manatees seen in Lake Griffin, Lake Harris and Little Lake Harris.  Now here’s where it gets interesting…

The folks at the Florida Fish & Wildlife Conservation Commission [FWC] explained they most likely “swam upstream – or south – along the Ocklawaha River from the St. Johns River and eventually made their way into Lake Griffin, which is connected to Lake Harris by canals.” That ends up being a distance of 80 miles. These adventurous manatees had to navigate their way through three locks and dams, which control the water levels!

Tom Reinert, a marine biologist with the FWC explains, “We’ve never had reports of them being this far south or this far upstream in the Harris Chain. Manatees like to swim around, and they’re curious creatures. So they’re probably just cruising and looking for food.”

Florida Manatees (that’s me!) are a subspecies of the West Indian manatee. We’re currently listed as “endangered” and are at risk from both natural and man-made causes of injury and death. Our exposure to cold stress, red tide, and other diseases are the natural challenges we face each day. The man-made issues facing us are; boat strikes, flood gates (or locks) and also getting caught and tangled up in fishing gear.

Manatees Spotted in the Harris Chain of Lakes!