Manatees are related to Elephants – Elephants don’t get Cancer? 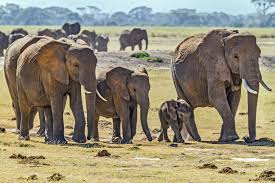 Elephants are huge, weighing up to 8 tons. Their spectacular evolution includes unique genetic processes which result in them rarely getting cancer. [Photo: C.E. Timothy Paine]

Greetings! Yes, it’s true manatees and elephants are closely related. And elephants rarely get cancer! In fact, manatees also hardly ever get cancer. It is cold stress, which is the manatee’s biggest enemy. And recently, red tide. So how can this cancer-resistant phenomenon happen?

Dr. Joshua Schiffman, pediatric oncologist and professor of pediatrics at the University of Utah and investigator at Huntsman Cancer Institute explains, “Because of their body size and how many cells they have and how long they live, [elephants] should all be developing cancer. But less than 5% of elephants die from it, versus up to 25% of humans.” Dr. Schiffman studies animals that evolved with ways to “naturally resist cancer.” These include elephants and bowhead whales, which can live for at least two centuries!

This is extraordinary research – as it studies the genes and molecules in these animals, all with the goal of hopefully developing new ways to prevent or treat cancer in humans. Dr. Schiffman said, “This is where the field is moving as a whole. If we can understand how these genomic changes are contributing to … cancer resistance, then we’ll be able to start thinking about how do we translate this to our patients?”

Interestingly, a recent paper published in the journal Cell Reports, talks about a “zombie” gene that “when brought to life by DNA damage causes that cell to die off.” Vincent J. Lynch, evolutionary biologist at the University of Chicago explains, “If [that cell] kills itself, then the damaged DNA never has the potential to eventually give rise to cancer.” And here’s even more interesting news…

…Lynch said, “Elephants as well as close living relatives like manatees, have many duplications of a gene known as LIF – but these copies don’t actually work like the original. In elephants, one copy seems to have reanimated and evolved a new on-off switch that responds to DNA damage. There’s probably lots of things which can contribute to augmented cancer resistance, and we found one of them in elephants.”

Lynch continued and said, “The way we normally think that evolution works is by acquiring lots and lots of genetic changes. Each one of them contributes a small effect. And when you add all those things together, you end up with a super cancer-resistant elephant.”

Dr. Schiffman said, “All cells get mutated all the time. My cells are mutating. Your cells are mutating. But hopefully our DNA repair genes are able to catch them. Cancer likes to shut these genes off.” Schiffman’s research uncovered other genes, which could give elephants and manatees their extraordinary “ability to quash cancer before it starts.” Dr. Schiffman discussed one gene that acts as a tumor suppressor gene, called p53. “p53 [acts as] genetic police for its role in stopping DNA damage from turning into cancer. Elephants have dozens of copies of the gene.”

Now contrast this with humans who “normally have just two copies of p53 – a less robust form than in elephants.” And when this p53 gene in humans is “mutated” or “inactivated,” cancer is “allowed to grow unchecked. This will not be the final story,” Schiffman said. Many more steps are needed before these research findings could be used toward human cancer therapies.