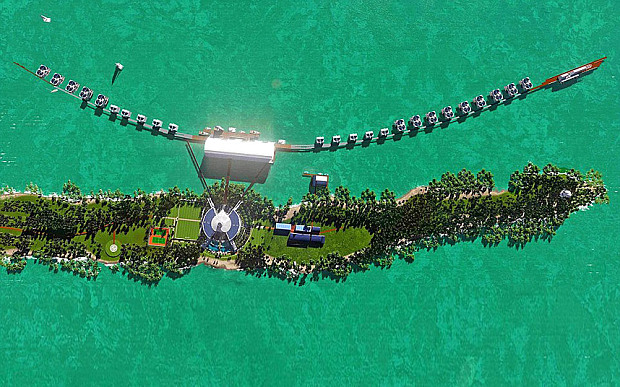 Golden Globe Award-Winner and environmental activist, Leonardo DiCaprio, is currently planning an extraordinary eco-resort for both humans and manatees! It will be called Blackadore Caye. Slated to open in 2018, it will sit on an island of 104 acres of uninhabited land just off the coast of Belize, which is his favorite diving spot. Why? Because the Belize Barrier Reef System happens to be the longest in the Western Hemisphere and it’s also the second largest on the planet! Now here’s some more great news…

…About half of the island will be devoted to DiCaprio’s passion of conservation! Blackadore Caye will have a large protection area for us manatees, loads of mangrove trees, and indigenous grasses. And it will be a 100% eco-resort. Eco-tourism has been constantly gaining popularity since the late 1970s. It also has a two-part effect. First, eco-tourism reduces the negative aspects of travel such as plastic water bottles and pollution. And second, it creates a positive atmosphere via participation in cultural exchanges and environmental work.

Tourists who visit Blackadore Caye will learn what they can and cannot bring onto the island. Also in following Leonardo’s conservation blueprint, materials native to the area will be used for the resort’s construction. And the local builders will all be trained in green-building processes and protocol, such as non-toxic paints, and LED lights running on a circadian rhythm.

DiCaprio bought the island with a partner, Jeff Gram, during his visit to Belize ten years ago. He said, “It was like heaven on earth. And almost immediately, I found this opportunity to purchase an island there.”

Mr. Gram has experience in establishing beautiful properties because he owns the Cavo Espanto, a luxury vacation spot on another private island in the Belize area. He said, “As for Blackadore, I believe that it will be an incredible private island that will set the mark for all future island developments.”

For the construction phase, Leonardo has teamed up with Paul Scialla, the chief executive officer of Delos based in New York. Blackadore Caye will have extraordinary villas, infinity pools and incredible sunset views. Its guests will stay in villas, which will be built on a giant platform in the shape of a beautiful arc with plenty of fish shelters below. There is also a team of scientists and engineers who already have spent over a year there studying how the resort will affect its surroundings.

Leonardo said, “The main focus is to do something that will change the world. I couldn’t have gone to Belize and built on an island and done something like this, if it weren’t for the idea that it could be groundbreaking in the environmental movement.”

Personally, I just might have to plan my own Caribbean adventure to Belize and visit all of my manatee buddies there!