Greetings! All of us manatees, in addition to a whole lot of frustrated Floridians are having a real-life nightmare dealing with a huge encroaching guacamole-thick algae bloom! It was first spotted on May 10th in Lake Okeechobee, the nation’s second largest freshwater lake and the largest lake in Florida.

Reports from recent years show that Lake Okeechobee is overloaded with high amounts of nitrogen and phosphorus caused from fertilizer runoff. John Campbell, spokesman for the U.S. Army Corp of Engineers from the Jacksonville District explained that, “Such nutrients, along with other environmental factors (such as warmer temperatures), promote growth of blue-green algae, also known as cyanobacteria” Mr. Campbell continued and said, “More than two weeks ago, the U.S. Army Corps of Engineers Jacksonville District discharged a high volume of the lake’s nutrient-polluted water into local canals to prevent flooding.”

It is likely that these nutrients are currently feeding the toxic algal bloom frenzy in Florida’s canals, rivers, coasts, and estuaries located in its four southern counties. Deborah Drum, Manager of the Ecosystem Restoration and Management Division for Martin County, Florida said, “…authorities have not been able to confirm if the algal blooms on the [Martin] county’s beaches are caused by something other than the release of nutrient-polluted water from Lake Okeechobee. However, a recent sample of water from a beach showed that the algae was the same species as the algae found in Lake Okeechobee and in affected estuaries.” 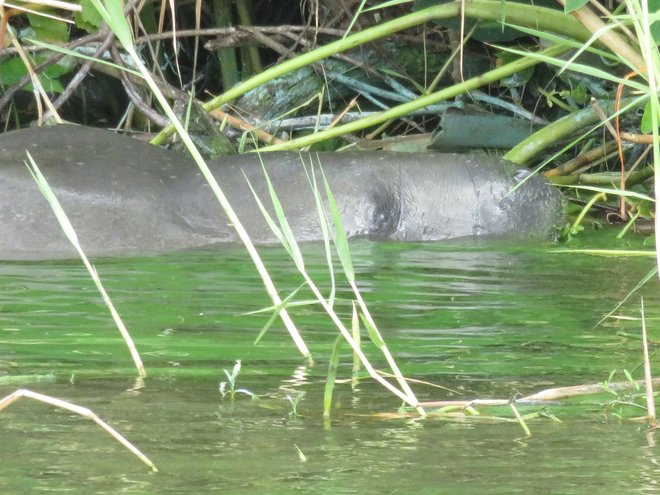 How does one stop the invading algae? Ms. Drum continued and said, “The state has all these regulator requirements about what can be used, and we need their help to vet these technologies. In certain cases, killing blue-green algae can cause them to release more toxins, and we don’t want to create worse conditions than the one we’re trying to solve right now.”

A statement from Florida Governor Rick Scott’s Office, “declared a state of emergency in Martin, St. Lucie, Lee and Palm Beach counties. The Governor also asked the Department of Environmental Protection and the Florida Fish and Wildlife Conservation Commission to take actions to address the issues caused by algal blooms in South Florida waterways, including developing a hotline for residents to report algal blooms and deploying teams of additional staff to more rapidly survey and sample areas impacted by blooms.”

It is difficult for us manatees to breathe through the guacamole-thick algae. Additionally, Florida residents are really frustrated and concerned about the possible health problems the algae poses. One resident said the algae “smells definitely like a toilet.” Another described the algae smelled like “dead, rotten fish.” Some Floridians in the affected areas are blaming the algae for their headaches, their respiratory issues and also for their rashes.