FWS Reviewers Should Weigh All of Our Manatee Facts before Downlisting 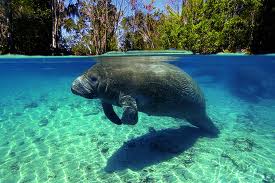 I just read a new report from my good friend Dr. Katie Tripp. She is the Save the Manatee Club’s Director of Science and Conservation. Dr. Tripp talks about how the U.S. Fish and Wildlife Service (FWS) is not looking at all of our manatee facts in their decision process to consider downlisting us.
Dr. Tripp explains, “In response to a lawsuit by the Pacific Legal Foundation, the U.S. Fish and Wildlife Service has decided down-listing manatees from endangered to threatened under the federal Endangered Species Act may be warranted, and the agency is embarking on a five-year status review as part of the process.”
Dr. Tripp continues, “Let me be very clear about the seriousness of the situation: from 2010-2013, 2,441 manatees died in Florida waters, which is 48 percent of the highest minimum population ever recorded (5,077 in 2010), but we’d have to wait until after 2015 to be able to include these data. However, ignoring this information would also constitute a substantial and unacceptable bias. Reviews are important, but when they’re going to be tied to a decision that could alter the fate of a species, they need to contain the best and most updated data and information. Unfortunately for manatees, the data from the winters of 2010-2013 including record mortality for the species, the worst-ever recorded red tide that resulted in manatees being committed to mass graves in southwest Florida, and a new, mysterious cause of death that has not yet even been labeled in the Indian River Lagoon won’t be in the mix because the most recent two years of data are left out of the models to avoid bias.”
I learned from Dr. Tripp that a tool used by the U.S. Fish and Wildlife Service during their Manatee Review Process is called the “Core Biological Model.” Unfortunately this model does not recognize the recent and unprecedented Florida manatee deaths from red tide in 2013. The model only recognizes current data through 2012 for the Atlantic and Upper St. Johns River, 2010-2011 for Northwest Florida, and 2009-2010 for Southwest Florida.
Now here’s what scares me – data for manatee survival rates only represent the years 2006-2008. Yikes that was half a decade ago!
I sure hope the FWS will realize the data used from the “Core Biological Model” does not account for our record red tide manatee deaths in 2013 and will reconsider any downlisting by weighing all of our facts.