Florida’s Coral Reef Tract in Miami is Being Buried Alive! 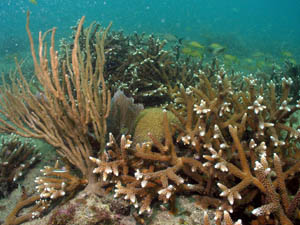 Greetings! In this blog I’d like to talk the serious issue of how dredging operations in the Port of Miami are literally burying coral reefs there. Florida happens to be the only state within the continental United States, which has broad and extensive coral reefs along its coasts. Coral reefs are a unique habitat because they give shelter, breeding sites and food sources for marine animals and plants. These include lobster, snapper and many other commercial species.

The Florida Reef Tract (FRT) runs 358 miles where it starts in the Dry Tortugas National Park by the Florida Keys and swings north to the St. Lucie Inlet.

The coral reefs of Florida were created some 5,000 to 7,000 years ago as the sea level rose after the last Ice Age. Coral reef growth is extremely slow. Research explains that a single colony might grow only one half to 7 inches a year! Additionally, corals are actually animals and algae lives within their skeletons! It is the algae that give coral its beautiful colors. The corals and algae have a symbiotic relationship. Corals take in the sugar and oxygen from the photosynthesis of algae. Then these plants take in nutrients and are also protected from the structure of the corals.

Coral reefs are delicate and will only grow when certain environmental conditions are met. These include …

According to a recent report from the National Oceanic and Atmospheric Administration [NOAA], “The large-scale dredging of Miami’s port to accommodate the newest generation of freighters, and undertaking that prompted a long-running battle with environmentalists, caused widespread damage to a portion of the area’s fragile and already distressed coral reef.” NOAA’s findings were based on a December 2015 study from scientists for the agency’s National Marine Fisheries Service. The study, “…found that as much as 81 percent of the reef near the dredging site was buried in sediment, and an Army Corps of Engineers contractor report from August shows up to 93 percent partial coral death because of sediment.” 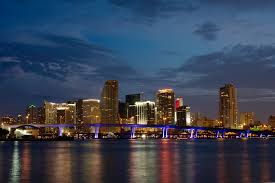 Dredging of Miami’s Port, which will accommodate newer and larger freighters, is actually burying 83 percent of the coral reefs there with sediment, which is killing off a significant portion.

In a previous blog, I talked about how the Great Barrier Reef in Australia is quickly dying off from climate change and ocean acidification. Now in Florida, we are seeing more and more beautiful reefs dying out. The study said, “Several cycles of white plague disease [coral bleaching], including one in 2014 that coincided with the dredge, have also badly hurt South Florida’s reef.”

Rachel Silverstein, Executive Director of the nonprofit group, Miami Waterkeeper said, “This Florida reef is as important to our country as the sequoias of California, and we are losing it faster than we can figure out why. There are a lot of stressors that are impacting and killing coral reefs, but this is a hyper-local example of something we could easily have prevented.”

According to the New York Times, “The agency’s analysis contradicts a December report by the corps, which primarily blamed white plague for the coral damage on reef sections near the dredge. In the corp’s report, scientists said that the white plague was responsible for 85 percent of the coral deaths in the upper and middle parts of the reef and in the control site, and for 18.3 percent of the deaths closer to shore. The report failed to highlight that 93 percent of the corals closer to the dredge had partially died because of sediment, compared with 7 percent at sites farther away.”

NOAA scientists disagreed with the corp’s focus on white plague disease in the Miami dredge area. NOAA concluded, “that the majority of the reef, stretching beyond 3,000 feet, showed conclusive damage to corals by dredging sediment.”

Coral reefs are critical to South Florida because they help protect its coast from hurricanes. They are also extremely important to marine biodiversity and the large tourism market in Florida.