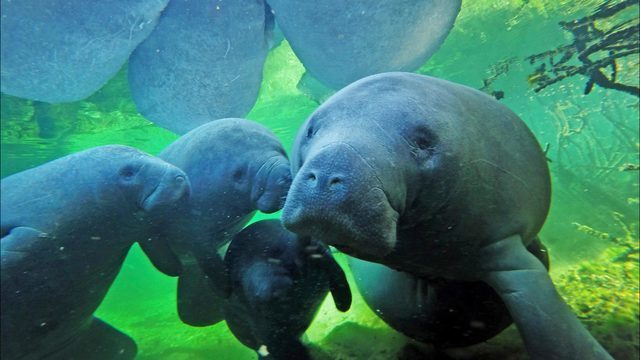 2018 could turn out to be a bad year for manatee deaths in Florida.

Greetings! You’ve probably read and experienced this extremely cold, snowy, and harsh winter, which doesn’t want to loosen its grip even though Spring 2018 is now here! Well, as I’m sure you know, manatees are warm-blooded and need water temperatures of at least 68 degrees Fahrenheit or else we could die of cold stress. Cold stress occurs in manatees due to their exposure to a long period of cold weather. Experts said exposure to water temperatures below 68 degrees Fahrenheit for long periods can put a manatee at risk for cold-stress syndrome. It leads to weight loss, internal fat loss, dehydration and other issues.

Unfortunately, the Florida Fish and Wildlife Conservation Commission [FWC] reported through March 9th of this year, “there have been 183 reported manatee deaths. Of those, 52 deaths are contributed to cold stress.” Mr. Ron Mezich with the Florida Fish and Wildlife Conservation Commission said “young manatees are especially vulnerable to death from cold stress.” He continued and said, “It’s one of those factors that manatees typically have to deal with, and a lot of young animals tend to be more susceptible to cold winters when they’re out on their own for the first time.”

A Florida-wide manatee survey found there are currently 6,131 manatees, which is down from 6,620 in 2017. According Mr. Jeff Ruch, Executive Director of the Public Employees for Environmental Responsibility (PEER), “Florida’s manatees are one big freeze away from an ecological disaster and need more, not less protection.”

PEER looks at the Florida Fish and Wildlife Conservation Commission statistics covering from January 1st to February 23rd, as evidence for a “bleak start to 2018 for manatees:”

2017 was a bad year for manatees because there were 538 deaths from all causes. Now compare that figure with 472 manatee deaths in 2016, and a five-year running average of approximately 480 deaths.

Jeff Ruch cites the U.S. Fish and Wildlife Service’s “reduced safeguards” for the manatee because of the 2017 reclassification of manatees from endangered to “threatened.”

PEER also voices its concerns about this year’s red tide killing manatees on Florida’s Gulf Coast. Through March 2, 2018, red tide “claimed 10 manatees this year.” In 2017 the Florida Fish and Wildlife Conservation Commission identified 63 manatee deaths from red tide. This compares to 53 red-tide deaths in 2016, 15 deaths in 2015 and 4 deaths in 2014. Unfortunately, 2013 was a record year with 276 manatees dying from red tide.