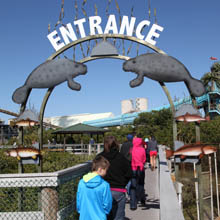 Great News! The Manatee Viewing Center [MVC] at Tampa Electric’s Apollo Beach has a cool new upgrade for you. It is slated to open its 29th season on Saturday, November 1st. And with the start of its 2014–2015 season, the facility will debut a brand new 50-foot observation tower. This cool tower will give you an extraordinary panoramic view of Tampa Bay, along with my awesome manatee buddies!

TripAdvisor has awarded the [MVC] its Certificate of Excellence for the second year in a row. How did they deserve such an award? The MVC just finished its biggest season yet. It had more than 300,000 visitors during its 22-week 2013-14 season! In fact – there have been more than 4 million visitors to the center since it opened in 1986.

Mr. Stan Kroh, manager of Land & Water Programs with Environmental, Health & Safety, said, “We’re thrilled to have this honor. The MVC is unique, free to visit and a great place for people of all ages to learn about and enjoy natural Florida. TripAdvisor is letting the rest of the world know what we’ve known for many years.”

In addition to the new observation tower, Mr. Kroh said other MVC improvements include a quarter-mile boardwalk and an interpretive kayak trail. I just might have to take a swim over to the Manatee Viewing Center and view this new stuff myself!