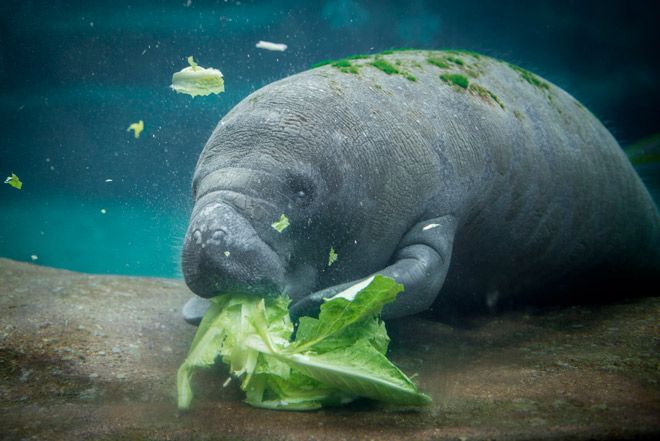 Awesome News!  Cadbury, a motherless male manatee calf, who was discovered near Key Largo, Florida in April just became a new resident at the Columbus Zoo and Aquarium.  When he was found, Cadbury was taken to Miami Seaquarium in Key Biscayne. He was rehabilitated there and grew from 94 pounds to 218 pounds.

Cadbury is now swimming in the Columbus Zoo’s 300,000-gallon aquarium where he is joined by longtime resident Stubby.  Stubby is a 19-year-old female manatee. She has been at the Columbus Zoo and Aquarium since 2005.

Ms. Jennifer Wilson, Zoo spokeswoman said Cadbury was given that special name because “he was rescued around Easter, when Cadbury crème eggs are popular treats.” Cadbury replaces Rae, who is another young female manatee.  She went from 430 pounds up to 700 pounds while she stayed at the Columbus Zoo.  Rae was recently flown from Columbus back to the Miami Seaquarium where she’ll be released in early 2015.

The Columbus Zoo and Aquarium is an important segment of the U.S. Fish and Wildlife Services’ Manatee Rescue and Rehabilitation Program.  It sure is great news when my manatee buddies recover from their injuries!

If you see any sick or injured manatees, please call the Florida Fish and Wildlife Conservation Commission at: 1-888-404-3922. They are the folks who are responsible for rescuing us in Florida.