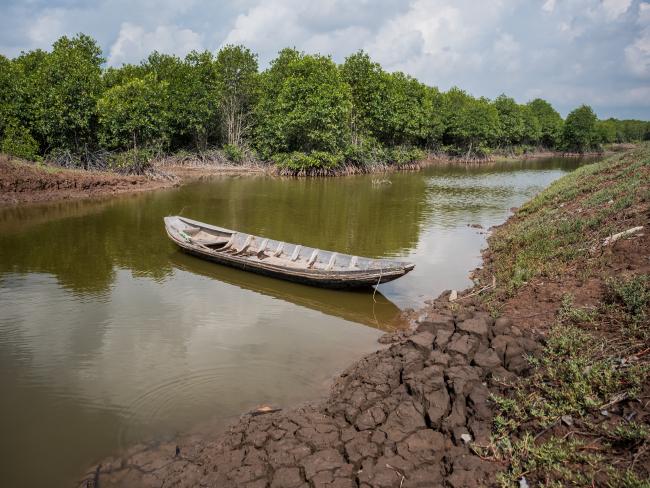 A canal with briny water in Bao Thuan Village, Vietnam. Climate change is increasing salt content of water in land located in South Vietnam. The most affected area is the Mekong River Delta, which is home to 17 million people. It produces around 50 percent of Vietnam’s rice harvest. This increase in salt now affects land used for rice paddies, coconut groves, along with other crops. Photo courtesy: Linh Pham – Getty Images

Greetings! Today I want to add on to my previous blogs where I talk about the very sobering subject of Climate Change. It is now affecting every country on every continent of the globe. The United Nations explains…

“People are experiencing the significant impacts of climate change, which include changing weather patterns, rising sea levels, and more extreme weather events. The greenhouse gas emissions from human activities are driving climate change and continue to rise. These emissions are now at their highest levels in history. Without action, the world’s average surface temperature is projected to rise over the 21st century and is likely to surpass 3 degrees Celsius this century – with some areas of the world expected to warm even more. The poorest and most vulnerable people are being affected the most. Climate change is a global challenge that does not respect national borders. Emissions anywhere affect people everywhere. It is an issue that requires solutions that need to be coordinated at the international level and it requires international cooperation to help developing countries move toward a low-carbon economy.”

According to the World Meteorological Organization (WMO), “in 2016, Earth’s average surface temperature hit a record level for the third consecutive year since records began in 1880. The global average temperature was about 1.1C over pre-industrial levels, and about 0.06C above the previous record set in 2015.” The WMO continued and said, “The Arctic Ocean could be ice free in summer as early as 2030. In parts of Arctic Russia, temperatures were 6C to 7C higher than the long-term average. On the other extreme of the world, Antarctica, sea ice hit its lowest extent ever recorded by satellites at the end of summer 2016. High-altitude glaciers declined in surface area in 2015 for the 36th year in a row. The 21st century has already seen 16 of the 17 hottest years on record.”

More sobering climate change news was uncovered in 2016 as atmospheric concentrations of the three most potent greenhouse gases – carbon dioxide (CO2), methane (CH4), and nitrous oxide (N2O) – all reached new record highs. In fact, for the first time in 2015, the level of CO2 in the atmosphere averaged 400 parts per million (ppm). Climate scientists agree that our atmospheric greenhouse gas concentrations must “be capped at 450 ppm of CO2.” This is the limit agreed upon during the historic 2015 Paris Agreement.

Also, scientists are now warning that an “unexplained rise of methane, which has a far more potent warming effect than CO2, in the atmosphere,” is taking place.

The National Oceanic and Atmospheric Administration (NOAA) said, “The average ocean level was 70 millimetres higher in 2015 than the 1993 water mark, having risen as much as 30 per cent faster in the 10 years to 2015 than in the previous decade.” NOAA continued and said, “The pace is likely to pick up further as ice sheets and glaciers shed mass, threatening the homes and livelihoods of tens of millions of people in low-lying areas around the world. The global average sea level could be between 0.3 and 2.5 metres higher by 2100.”