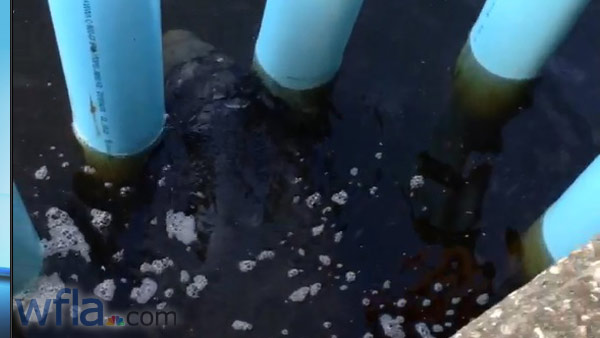 Yikes! One of my manatee buddies ended up stuck between some big PVC pipes in Bradenton, Florida! Bradenton resident Alicia Artz decided to go on nice, quiet stroll adjacent to the scenic Sola Bay. Actually, Sola Bay, the Perico Bayou, and Anna Maria Sound all come together at the mouth of the Manatee River. These waters are located at the southern most point of Tampa Bay.

Of course it’s absolutely the perfect spot to watch and enjoy manatees. That’s what Ms. Artz thought during her walk. Well – she did see a manatee there. However, there was only one problem. The manatee was caught between a storm drain there and some PVC pipes! Ms. Artz said, “There was an actual manatee trapped within the pipes.” My manatee buddy was desperately trying to escape, however just no luck at all on that warm Florida day. Alicia continued and said, “Half the body was in the [storm drain] at one point and then the other half was out because it was huge.”

Then David Tartaglia came over and saw the trapped marine mammal struggling to get out. Interestingly, he also noticed several other manatees very concerned about their trapped buddy. He explained, “A few of the other manatees had come over and gone nose to nose with it, so obviously they were aware that their pal was in trouble.”

As the news quickly grew, other close-by neighbors came over! Everyone pushed and pulled on those stubborn PVC pipes. Mr. Tartaglia explained, “No one wanted to leave until we could get him out.” Ms. Artz continued and said, “I felt horrible for it, I wanted to free the manatee.”

Then one of the neighbors came over and had some straps that could go around the pipes. All of the people there worked together and they were able to separate the PVC pipes, so the trapped manatee could finally escape! Mr. Tartaglia said, “We all let out a big cheer when he got free.”

The irony here is those PVC pipes were installed by the drain so an accident just like this would never happen. Manatee county officials told the residence that they would quickly launch an investigation to see exactly how the manatee became trapped there.