Author Robert Scott Thayer with some of his Kobee Manatee® Fans at Blue Spring State Park in Orange City, Florida. 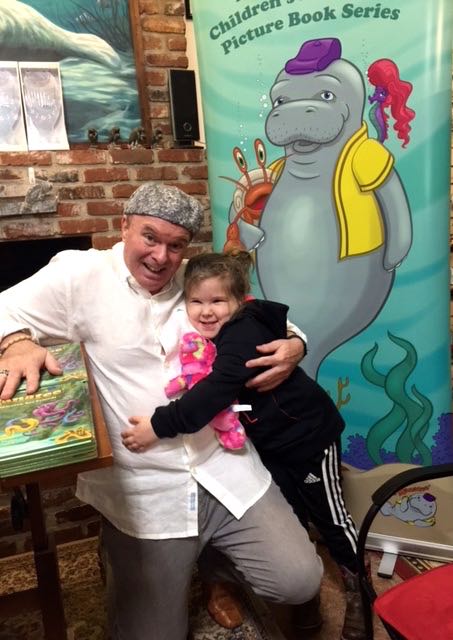 Thayer explains, “Each title in the Kobee Manatee® series focuses on a new educational subject with a fictitious story weaved in using anthropomorphic characters. An expert in the appropriate field reviews the scientific facts presented in each title before its publication. The unique focus here is a West Indian Manatee, the series protagonist (KOBEE MANATEE), who teaches children (aged four to eight) in a fun and enjoyable way.”

He continues and says, “The books make a wonderful bedtime story, because the words are easy to read and I do not ‘talk down’ to the children. In addition, the brilliant and colorful illustrations by Lauren Gallegos harmonize nicely with the text. Throughout the series, I position Kobee as both a mentor and an educator. Kobee’s seafaring pals include, Tess the seahorse and Pablo the hermit crab. They put their trust in Kobee, as he does with them. This series is about how friendship, trust, and comradery move the ensemble through difficult challenges along their journey.”

Currently there are three installments in the children’s series. Thompson Mill Press has an endorsement for their first title from the non-profit organization “Save the Manatee Club [SMC],” located in Maitland, Florida. SMC began its operations in 1981 when singer/songwriter Jimmy Buffett and Florida Governor, Bob Graham founded the organization. Dr. Katie Tripp, SMC’s Director of Science and Conservation, confirmed all manatee facts. In addition, the first title received excellent reviews including Kirkus. Clearly, this endorsement and the reviews added significant credibility and enhanced the debut title’s intrinsic value. On September 8, 2015, Thompson Mill Press released its second title in the series, Kobee Manatee®: A Wild Weather Adventure. They also received a repeat performance of excellent reviews. Additionally, in January 2015, TMP received a wonderful endorsement from Rob Marciano | ABC News Senior Meteorologist. Rob edited all weather facts. He can be seen on ABC’s Good Morning America and ABC’s World News Tonight national broadcasts. In May 2016, Rob told us his daughter, Madelynn, “…is obsessed with Kobee – the story and illustrations are captivating – we rotate the 2 books every night.”

Manatees are sometimes called “sea cows” because of their unique vegetarian diet where they eat only seagrass and other aquatic plants. They also have a large whale-like body, which tapers down to a paddle shaped tail. Manatees also have two forelimbs called flippers, which help them steer, along with their paddle shaped tail. The average length of a manatee is ten feet and their average weight is between 800 to 1,200 pounds. However, on some occasions you can find a Florida Manatee’s length measuring up to thirteen feet and it can weigh up to 3,500 pounds.

These gentle giants who have no enemies are warm-blooded and need water temperatures of at least 68 degrees Fahrenheit. If the coastal waters get any cooler than that, they become cold-stressed and eventually could die if not found in time. That’s why in the winter months, especially during manatee season (November 15 – March 31), manatees make a dash into the warm balmy waters of Florida’s natural springs, such as Blue Spring State Park in Orange City or warm water run offs of Florida’s power plants, such as Manatee Lagoon in West Palm Beach. In both of these places, the water temperatures run right around a warm and balmy 72 degrees Fahrenheit, which is absolutely perfect for manatees.