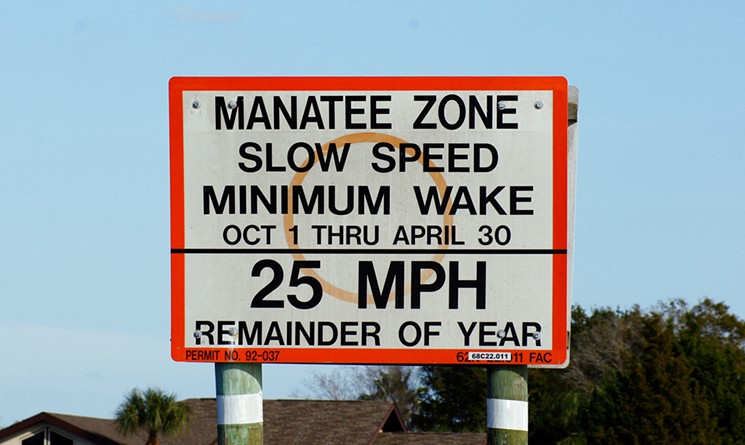 I just got a seamail stating Key Biscayne officials are absolutely furious about water taxi routes for the upcoming Miami Boat Show, which will run through mapped manatee zones. The 2016 Miami Boat Show is slated for February 11th through February 15th. The show will be held at the Miami Stadium Park & Basin located at Virginia Key. This will be the first time the boat show will be held in Virginia Key. This small but beautiful scenic beach is located right off the Rickenbacker Causeway, which is the main route from Miami over to Key Biscayne, Florida. The city of Miami is planning to spend $16 million right next to the stadium to create a beautiful park with turf for the event.

The water taxi route for the 5-day boat show was planned to minimize traffic going to the show. The map was submitted on March 30th. However, Mayra Lindsay, Mayor of Key Biscayne became aware of this proposed map after its submission date. Mayor Lindsay is upset because there was a lack of transparency from the boat show management. She said, “We’re just trying to figure out what’s going on here because this is all moving so fast.” 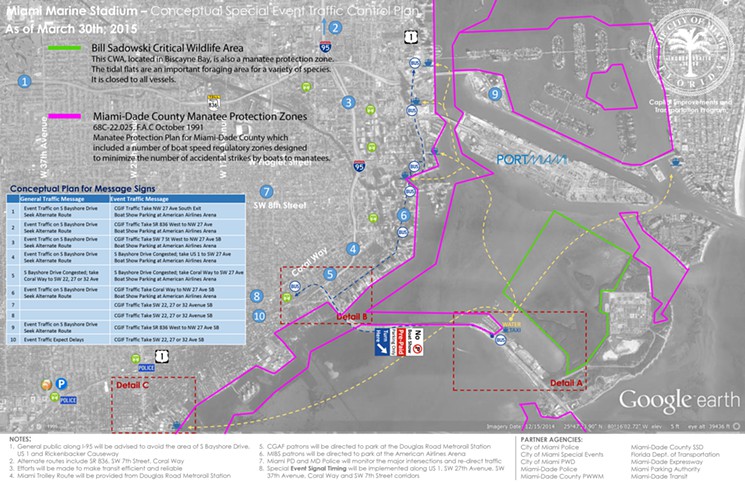 The pink and green lines outline how the proposed water taxi routes will directly interfere with wildlife areas. Courtesy of Village of Key Biscayne

The map clearly shows manatee protection zones would be affected. The proposed routes for the show also interfere with the Bill Sadowski Critical Wildlife Area [CWA]. The CWA consists of 700 acres and is located in Key Biscayne Bay. The CWA is closed year round to any watercraft. It is a manatee protection zone and it also protects shorebirds, wading birds, and marine life. Mayor Lindsay explained, “These routes are just not possible. Canoes aren’t even allowed in the CWA.”

Mayor Lindsay doesn’t know how these water routes will actually be a solution to traffic during the boat show. She says, “When you think about transporting thousands of people, it’s not really possible. Taxis will have to go very slowly, people will need to be patient, and the amount of taxis that will even be allowed to operate at once is unknown.”

Laura Reynolds, Director of the Tropical Audubon Society, is outraged about the proposed water taxi map. She said, “The overall transportation plan for the boat show is very weak-linked because of how hard it is to get to the area. We don’t support the boat show in its current state. They need to make improvements in their plan. It’s not that we don’t support it entirely – it just needs to be something that’ll leave the area in a better state, not worse.” Miami Commissioner Marc Sarnoff said, “We all have an obligation to preserve the preserve, so if this map is true and it does cross the CWA, then of course I would require the city to rectify that.”

Commissioner Sarnoff is optimistic that a full resolution to the map will happen. He explained, “A formula for a recommended settlement has been provided, and we continue to negotiate toward a good-faith resolution.”

Ms. Cathy Joule, Director of the Miami Boat Show, is concerned about protecting manatee zones and the environment that surrounds the show’s February events. She said, “We are currently working with environmental regulatory agencies on mapping the water taxi routes for the 2016 show to ensure that no sea life is harmed and we comply with regulations, as we always do. Once those maps are finalized, we will share them with participants and the public.”

I’m confident that there will be a quick resolution to this issue and all wildlife and my manatee buddies will be protected!