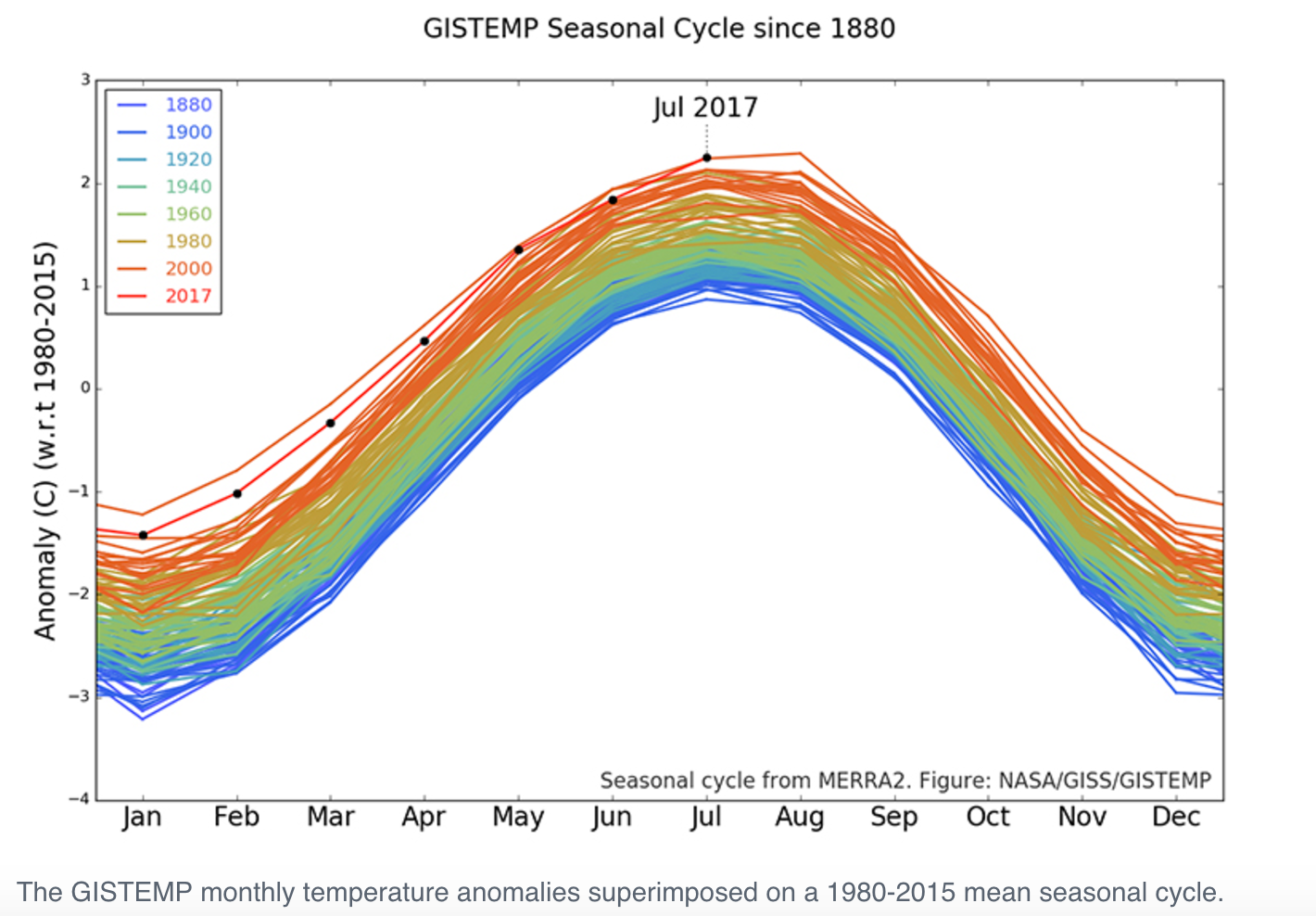 The above temperature chart easily shows how climate change and global warming have been intensifying over the past 50 years.

Greetings! Here is more sobering news about the issue of Climate Change. Just take a look at the chart and you will see from the “blue zone”up to the “red zone,” how rising global temperatures are becoming much more common.  Once again, and according to NASA’s Goddard Institute for Space Studies, July 2017 “tied July 2016 for the hottest month on record.” In fact, “Sixteen of the 17 hottest years on record have occurred in the 21st century, including 2015 and 2016, both of which saw a temperature boost thanks to a strong El Niño event. El Niños bump up surface temperatures by churning warm water to the ocean surface. Record-setting temperatures in 2017 are especially concerning now that there is no El Niño; in other words, most of the excess heat this year is due to human-induced climate change.”

Antti Lipponen, a physicist at the Finnish Meteorological Institute located in Helsinki, Finland said, “It’s clear that temperatures for more than 100 countries are climbing ever higher on the back of increasing carbon pollution. While there are individual variations in how hot any year is, the signal of climate change is unmistakable.” Lipponen continued and said, “There are no single countries that clearly stand out [however] the warming really is global, not local.”

Why was the Arctic Circle 6.5 degrees Fahrenheit warmer than Normal in 2016?

Our earth is getting warmer each year, which is the result of heat-trapping gases thrown into the air by the burning of fossil fuels (coal, oil and natural gas).  Scientists have always predicted that the Arctic region would be the first to warm and than it would warm faster than the rest of the planet. Unfortunately, today’s real-time atmospheric measurements are proving them right.

Former NASA Chief Scientist, Waleed Abdalati, who now heads the environmental research program at the University of Colorado said, “The Arctic is mostly ocean covered with a layer of ice; changes from ice to water often kick in a cycle that contributes to global warming. Sea ice is white and it reflects the sun’s heat back into space. But when it melts, it’s replaced with dark ocean that strongly absorbs it.”

Mark Serreze, Director of the National Snow and Ice Data Center in Boulder, Colorado added to Waleed Abdalati’s comments and said, “That heat gets transferred back up to the atmosphere in fall and winter. As that happens, water vapor – a greenhouse gas – hangs around, trapping more heat. More clouds form around that time, also acting as a blanket.” I feel these scientists have provided wonderful explanations on the extreme dangers of climate change and global warming. As more news comes out, I’ll be sure to let you know.

Is Global Ocean Circulation Slowing Due to Climate Change? (August 10, 2017)