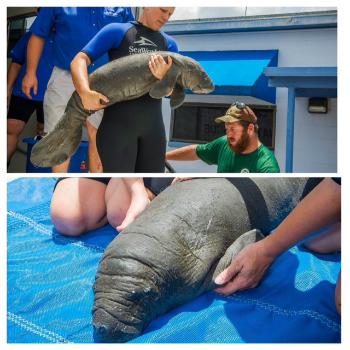 I just learned that SeaWorld rescued an injured manatee from the Indian River in Port St. John, Florida. The Florida Fish and Wildlife Conservation Commission was monitoring the manatee for a few days. They noticed that it was not going under water and it seemed to have been hit by a watercraft.  The manatee was transported to the Lowry Park Zoo in Tampa for its care.

So far in 2014, SeaWorld rescued six manatees and returned six.  This was their 501st manatee rescue since its animal rescue program began in 1976.  SeaWorld runs one of the world’s top respected marine animal rescue programs and they have assisted more than 23,000 animals that were sick, injured, orphaned and abandoned.

SeaWorld Orlando is part of the Manatee Rescue & Rehabilitation Partnership (MRP) and is an acute care rehabilitation facility that gives life-saving medical attention and care to rescued manatees.