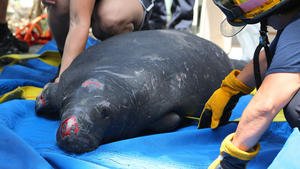 Yikes…It was a close call for one of my manatee friends who unfortunately got caught in a pump station by Fort Lauderdale’s New River!  As she swam through the structure, a grate blocked her path.   Then when she tried turning around and going back to where she started from, the current was too strong.  The female manatee measured seven feet.

Fort Lauderdale city workers discovered the trapped female manatee. As a result, a two-hour rescue operation by the Florida Fish and Wildlife Conservation Commission and several city departments took place along the Riverwalk area. To keep pedestrians and joggers away from the rescue site, the police put up yellow tape boundaries. Divers and cranes where quickly sent in for the rescue.

Water was drained in order to isolate the manatee. Once this was accomplished, Fort Lauderdale Fire Rescue divers were able to wrap and get her on a stretcher.  The stretcher was than securely attached to a crane hoist which safely lowered the manatee to the ground.   From there, workers were able to carry the stretcher and load it on a truck.

Amber Howell, from the state wildlife commission headed up the rescue. There was noticeable blood on both the manatee’s tail and nostrils. The truck took the injured marine mammal over to the Miami Seaquarium in Key Biscayne.

Ms. Liz Barraco, spokeswoman for the Florida Fish and Wildlife Conservation Commission explains that the female manatee “definitely has some injuries, but biologists are really confident that a quick rehab is what she needs.” Barraco continued and said, “There were a lot of different pieces that went into making this a success for the animal.”