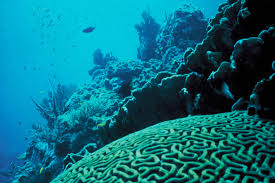 In this blog I’d like to talk about a very dangerous and increasing condition called Ocean Acidification, which can not only affect us manatees, but also every living organism on the planet, including humans!   However, before I do, let me explain what pH is and how it is used to identify Ocean Acidification…

Ocean Acidification or “OA” occurs when carbon dioxide [CO2] in the air is absorbed by seawater. This absorption creates chemical reactions in the water, which disrupt the delicate saturation state of very important calcium carbonate minerals. Calcium carbonate [CaCO3] actually is found in at least 4% of the earth’s crust and it is common all over the world!

You know calcium carbonate in its common everyday forms of chalk, marble, and limestone. These forms are created by the sedimentation of shells, shellfish, and coral in a timespan of millions of years. These 3 forms of calcium carbonate are exactly the same in chemical terms; however, each differs in purity, whiteness, thickness, and consistency. Clearly, calcium carbonate is one of the most useful materials known to man!

Calcium Carbonate – Its Critical Function in the Oceans

Now – with increasing amounts of ocean acidification caused from increasing amounts of carbon dioxide in the air, many of these vital areas in the oceans are actually becoming undersaturated with calcium carbonate. The result? These conditions will most likely affect and disrupt these living organisms in maintaining their skeletons and shells. Clearly, our precious coral reefs living in the oceans could be seriously affected by these changes.

What is causing the Increase of Carbon Dioxide in the Air?

During this past century, activities such as manufacturing from humans have released very large amounts of carbon dioxide, along with other greenhouse gases into the atmosphere.  According to the Environmental Protection Agency [EPA], “Carbon dioxide can stay in the atmosphere for nearly a century, so Earth will continue to warm in the coming decades. The warmer it gets, the greater the risk for more severe changes to the climate and Earth’s system. Although it’s difficult to predict the exact impacts of climate change, what’s clear is that the climate we are accustomed to is no longer a reliable guide for what to expect in the future.”

Additionally, carbon dioxide and other greenhouse gases (most coming from the burning of fossil fuels for producing energy) actually simulate a large floating blanket wrapped around the Earth. This floating blanket traps energy and causes our atmosphere to warm. Hence the term, Greenhouse Effect. The increasing amounts of greenhouse gases can create catastrophic changes on our Earth’s climate, which can create dangerous conditions for human health and also ecosystems around the world, including our precious oceans.

According to the National Oceanic and Atmospheric Administration [NOAA], “Estimates of future carbon dioxide levels, bases on business as usual emission scenarios, indicate that by the end of this century the surface waters of the ocean could be nearly 150 percent more acidic, resulting in a pH that the oceans haven’t experienced for more than 20 million years.”

Once again quoting NOAA, “Ocean acidification is an emerging global problem. Over the last decade, there has been much focus in the ocean science community on studying the potential impacts of ocean acidification. Since sustained efforts to monitor ocean acidification worldwide are only beginning, it is currently impossible to predict exactly how ocean acidification impacts will cascade throughout the marine food chain and affect the overall structure of marine ecosystems. With the pace of ocean acidification accelerating, scientists, resource managers, and policymakers recognize the urgent need to strengthen the science as a basis for sound decision-making and action.”

Clearly, we need to increase awareness on the serious issue of ocean acidification and how it can affect not only us manatees, but all living organisms on our planet.

I’ll be blogging more about this soon!