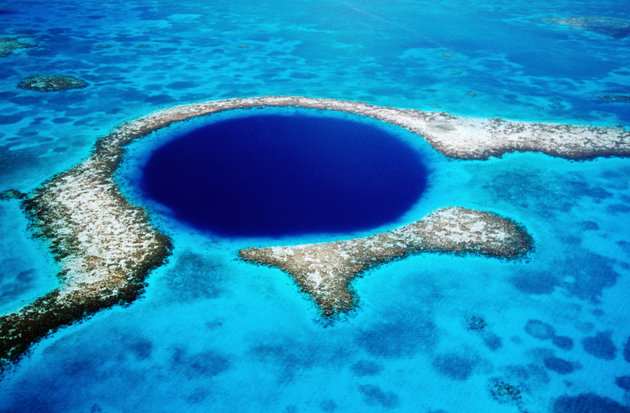 A blue hole forms when a cavern’s roof collapses, which is then filled up with water. Most of the blue holes were initially covered with water during the end of the last Ice Age, which was approximately 10,000 years ago.The unique geological formations in the Great Blue Hole are important because they formed in the air, when the cavern was dry and sat above sea level.  Scuba divers can explore the “thousands of stalactites and stalagmites that were formed when the Blue Hole was an aboveground series of caverns.”

In 1971, legendary French ocean pioneer and marine biologist, Jacques Cousteau, and his famous research ship, Calypso, visited the Great Blue Hole in Belize. He reported the Blue Hole as one of his favorite “10 dive sites in the world.”  In 2012 the Discovery Channel “ranked the Belize Blue Hole as the #1 most amazing place on Earth.”

When you visit the Central American country of Belize, the Great Blue Hole is located, “approximately 62 miles offshore of Belize City. The perimeter of the Blue Hole is Lighthouse Reef, a natural coral atoll.”The hole is “circular in shape and is 984 feet in diameter and 410 feet deep.”

How did the Great Blue Hole get its name? The name “Great Blue Hole” came from the British diver Ned Middleton, who wrote a book about his career as a diver in 1988 titled, “Ten Years Underwater.” Even though the Blue Hole was “charted by the Spanish, no one is sure what name they gave for the region.”

The Great Blue Hole of Belize is actually “a UNESCO (United Nations Educational, Scientific and Cultural Organization) World Heritage Site, as being part of the impressive barrier reef, which is the second-largest barrier reef in the world after Australia’s Great Barrier Reef.” Charles Darwin on his “around the world voyage aboard the HMS Beagle, visited the Belize Barrier Reef in 1836 and declared it the most remarkable coral reefs in the entire Caribbean.”[

Finally, it’s important to note that because of the many challenges of diving in the Great Blue Hole, you must have “completed at least 24 dives” before you dive this incredible UNESCO site.