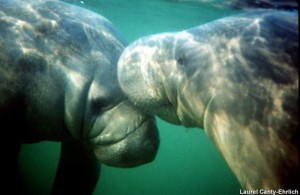 Greetings!  Today I’d like to talk about the serious circumstance of watercraft strikes and how they can be lethal to us manatees.  Professor Roger Reep of the College of Veterinary Medicine at the University of Florida will discuss his personal experiences with manatees and he’ll help explain how humans can co-exist with manatees in their natural habitat.

From my previous blogs, I talked about how manatees are warm-blooded marine mammals that need water temperatures of at least 68 degrees Fahrenheit to survive. As a result, in the winter months manatees will migrate to Florida’s warmer inland waters such as natural springs and power plant discharge areas. Professor Reep explained “…humans also like to spend time in warm water and they don’t always share well. Habitat destruction, entanglement in fishing gear, and pollution all threaten manatees, in addition to natural dangers like cold stress.”

Professor Reep continues and explains, “…the biggest threat of all is not from food or cold, but from boats.” The Professor talks about the correlation between the increase in human population throughout Florida, and the increase in manatee deaths from boat strikes. He explained that during the period from “…2008 – 2012, an average of 88 manatees per year died from boat strikes alone.”  According to the Florida Fish and Wildlife Conservation Commission (FWC), “25-30% of annual manatee deaths are attributed to watercraft. Deaths are more often a result of blunt-force impacts than propeller cuts. Efforts are underway to protect manatees from boat strikes by implementing and enforcing reduced speed zones. By reducing boat speeds, both the manatee and the boater have more time to react and avoid a collision.”

According to the FWC, “The faster a boat goes, the more force is applied to a strike. For instance, the force of a strike at 30 miles per hour is four times that of a strike at 15 miles per hour, all other factors being equal. If a watercraft strikes a manatee in the head, such as while the animal is taking a breath, the animal may die immediately. Strikes in other areas can result in acute injuries that quickly result in death but also can result in chronic injuries that linger for days, weeks, or longer before the manatee finally succumbs. Internal injuries, such as a broken or dislocated ribs, can result in death from internal bleeding or infection.” 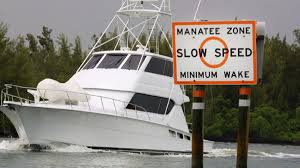 Professor Reep explained that, “Reduced speed zones have been implemented at designated locations in 18 Florida counties. They include portions of over 20 major rivers, but constitute only a very small fraction of the total amount of navigable waterways used by manatees in Florida.”

So one would ask, why aren’t there manatee speed zones everywhere in Florida? Professor Reep answered, “That it’s a political and social issue. Most people don’t want to have to deal with speed restrictions when they’re trying to enjoy a weekend out on their boat – only about 60% of boaters comply with the slow speed zones.” And, “there are not nearly enough marine patrol officers to cover the area in question.”