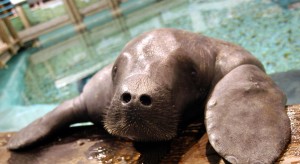 Can you believe it? My buddy – Snooty the manatee will be 66 years old on Monday, July 21st! He’ s the oldest manatee on record. Snooty was born on July 21, 1948 at the old Miami Aquarium and Tackle Company. Snooty weighs in at 1,100 pounds and he is 9 feet, 8 inches in length. Yikes – he’s catching up to me☺!

Snooty lives at the Parker Manatee Aquarium located on the grounds of the South Florida Museum in Bradenton. It holds about 60,000 gallons of water and it also has a medical pool. As a result, the aquarium is a “second stage” facility and is used as a temporary home to manatees recovering from a rehab hospital.

Of course Snooty is the mascot for Manatee County in Florida. And like me, he corresponds with students around the country. So people can better understand us manatees, Snooty has also trained with the New College of Florida and the Mote Marine Laboratory, which are both located in Sarasota.

Snooty’s birthday party will be held on Saturday, July 19th from 10 a.m. to 2 p.m. And the admission to the party is free! The giant celebration will be held outside in the Spanish Plaza at the South Florida Museum’s North parking lot by the Manatee River.

So I’d like you to join me in wishing my pal Snooty a wonderful “Happy Birthday!”