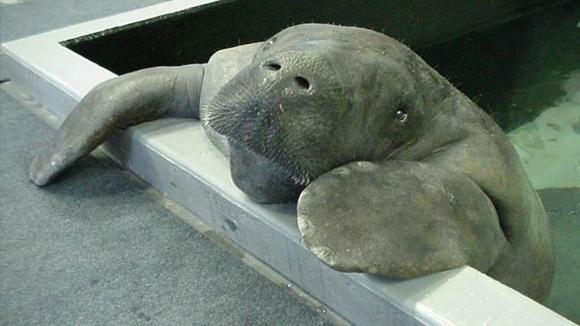 Greetings to you. My good buddy, Snooty the Manatee has died from a heartbreaking accident at the South Florida Museum in Bradenton on Sunday, July 23rd. This is so sad…I just blogged about Snooty’s historic 69th birthday on July 21st. And he had a fantastic birthday bash on Saturday, July 22nd, where over 5,000 people showed up to celebrate it with him!

The South Florida Museum stated, “Snooty was found in an underwater area only used to access plumbing for the exhibit life support system. Early indications are that a panel that is kept bolted shut had somehow been dislodged and that Snooty was able to swim in.” Brynne Anne Besio, CEO of the South Florida Museum said, “Snooty’s death was a heartbreaking accident and we’re all quite devastated about his passing.”

Mourners are leaving flowers at the aquarium to pay their respects. They were three other younger manatees sharing Snooty’s habitat. The museum’s COO, Jeff Rodgers explained, “The younger manatees had entered the same area as Snooty, but they had managed to escape – it appeared [Snooty] had been unable to turn around.” Rodgers continued and said, “Snooty weighted about 1,300 pounds whereas the other manatees – who are at the museum as part of a rehabilitation program – weighed around 500 – 600 pounds.”

Snooty was born on July 21, 1948 at the old Miami Aquarium and Tackle Company. Then in 1949, Snooty was transported over to Bradenton, Florida. Snooty was living at the South Florida Museum’s Parker Aquarium all these years. Additionally, Snooty was also the official mascot of Manatee County since 1979.

Snooty was definitely a celebrity because the Guinness World Records has officially recognized him as the “World’s Oldest Manatee in Captivity.”  The Florida Fish and Wildlife Conservation Commission reported the oldest manatee living in the wild was 59 years old. However, a manatee living in the wild usually only has a life span to around age 30 due to serious natural threats of red tide and cold stress. And the unfortunate ongoing human threat of watercraft strikes.

Snooty the Manatee Dies Just 2 Days after his 69th Birthday