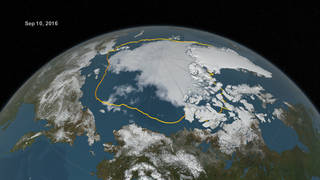 The 2016 Arctic sea ice summertime minimum shown here was reached on September 10th. This is actually 911,000 square miles below the 1981-2010 average minimum of sea ice, which is shown by the gold line. Credits: NASA Goddard’s Scientific Visualization Studio/C. Starr

Greetings! Unfortunately, I have some sobering climate change news for you. According to NASA and its supported National Snow and Ice Data Center located at the University of Colorado in Boulder, the Arctic sea ice annual minimum that was just taken on September 10, 2016, “ties for the second lowest on record.”

Their new research analysis discovered that “1.60 million square miles … is effectively tied with 2007 for the second lowest yearly minimum in the satellite record.”  NASA explained, “Since satellites began monitoring sea ice in 1978 [its] researchers have observed a steep decline in the average extent of Arctic sea ice for every month of the year.”

Actually, the role of the Arctic Ocean ice and surrounding seas assists in the regulation of our planet’s temperature. It also influences important circulations of our atmosphere, our oceans. Arctic Ocean ice also impacts the Arctic towns and ecosystems.  Additionally, the Arctic Ocean ice shrinks every year during the warmer seasons of spring and summer. The ice reaches its yearly minimum in early to mid-September. Then once again, the sea ice begins its building cycle and regrows during the coldest seasons of the fall and winter months, when the sun is located below the Arctic horizon.

This summer of 2016 had scientists surprised because the pace of the melt kept changing. The melting season began this past March and it began with “a record low yearly maximum … and a rapid ice loss through May.” Then the melt slowed down in June and July because of cloudy skies. However, right after two very large storms crossed the Arctic basin in August, the sea ice melt definitely sped up through early September.

According to Mr. Walt Meier, sea ice scientist with NASA’s Goddard Space Flight Center in Greenbelt, Maryland, “It’s pretty remarkable that this year’s sea ice minimum extent ended up the second lowest, after how the melt progressed in June and July. June and July are usually key months for melt because that’s when you have 24 hours a day of sunlight – and this year we lost melt momentum during those two months.” Meier also explained that, “decades ago, the melt season would slow down by the middle of August, when the sun starts setting in the Arctic. But in late August and early September there was a pretty fast ice loss in the Chukchi and Beaufort seas…”

As more climate change news becomes available, I’ll add it to my blogs for you.