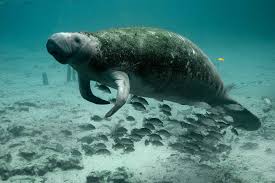 Greetings! Today I’d like to talk about the recent downlisting of manatees from endangered to threatened. On March 31, 2017, The US Fish and Wildlife Service (USFWS) re-classified the West Indian Manatee from “endangered” to “threatened.” The manatee has been listed as endangered for the “last 44 years.” Back in 1973 there were only a few hundred manatees left in Florida. This past January, the official Florida manatee count was 6,620. US Secretary of the Interior Ryan Zinke said, “The Fish and Wildlife Service has worked hand-in-hand with state and local governments, businesses, industry, and countless stakeholders over many years to protect and restore a mammal that is cherished by people around the world. Without this type of collaboration and the commitment of state and local partners, this downlisting would not have been possible.”

However, many scientists along with conservationists do not agree with the USFWS’s downlisting decision. They explain that when the feds focus on the Florida manatee’s population increase, they are overlooking huge threats to the manatee’s future health. Thomas O’Shea, research biologist said, “I cannot support the downlisting of the West Indian manatee as proposed. In addition to population growth and stability, a main goal for recovery of the Florida manatee … is reduction in threats to habitat and human-caused take of manatees. Reduction in threats to manatee habitat is not clearly indicated with strong supporting data.”

And if the Florida manatee’s circumstance of downlisting wasn’t bad enough, the Antillean manatees living in Belize’s coastal waters are could go extinct. Why? Jamal Galves, marine researcher explained, “When the FWS downgraded the endangered status, it did not consider that there are two subspecies of West Indian Manatee: the Florida Manatee, which has a rebounding population of over 6000; and the Antillean Manatee, which is found in Belize with a population of between 800-1000.” He continued and said, “There is already a high incident rate of manatees dying in Belize and this reclassification might create a lack of diligence, which could be the final blow to the manatee population. I will go further in saying that it won’t just make matters worse, but could also be the final blow to the [Antillean]manatee population.”

Mr. Galves added that, “There were 44 [Antillean] manatee deaths in 2015 and 27 more last year, the majority of which were due to human encounters. To date, there have been 17 manatee deaths for 2017.” Galves said, “Conservation groups in Belize will continue to maintain the same level of vigilance in their awareness campaigns, given the dire state of the Antillean manatee population.”