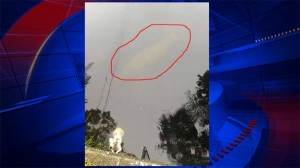 Awesome News! I just learned one of the Tampa Bay Police Department officers took this fascinating photo of a manatee keeping a scared dog company during its rescue from the Hillsborough River! Police said neighbors heard “noises and whimpering,” as they saw a dog “struggling near the bank.”
The manatee (circled in red) was staying with the dog until a marine patrol unit arrived. Officer Randy Lopez quickly rescued the dog. Numerous bug bites could be seen all over it. And the dog also had some problem with his paws. Fortunately, the police found the dog’s owners and returned it to them.
As for my manatee buddy, police said, “it’s one of those rare sights you only see once in a lifetime.” I love telling you these types of stories!