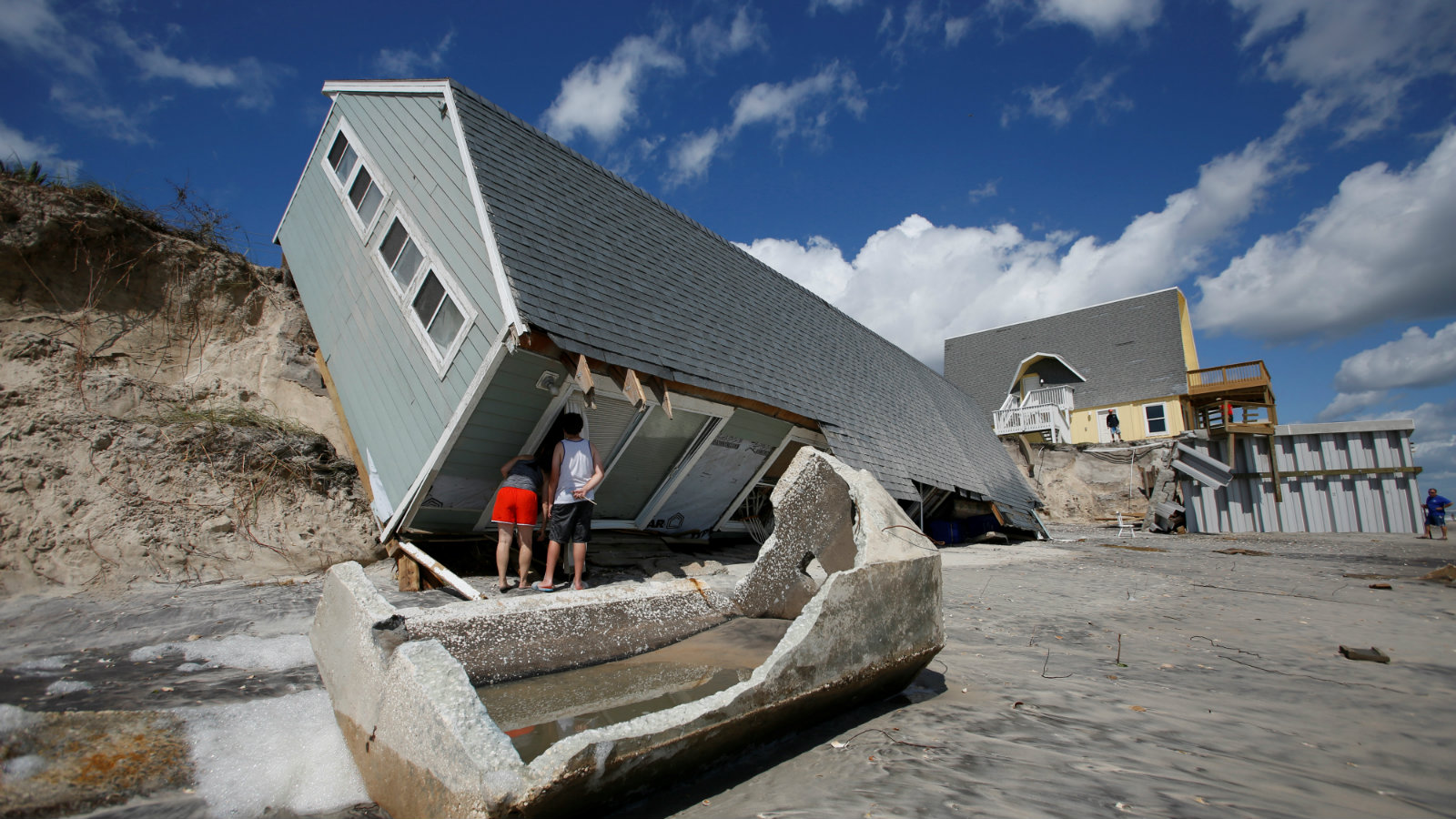 Residents take a look at the devastation on a coastal house in Vilano Beach, Florida from Hurricane Irma. Photo Courtesy: REUTERS/Chris Wattie

Greetings! It’s been extremely difficult these past couple of weeks, as nature unleashed her wrath in Houston, Texas, the Caribbean, and most recently in Florida – compliments of Hurricane Harvey and Hurricane Irma. Is Climate Change to blame? Take a look at some extraordinary facts…

Are Harvey and Irma Solid Evidence Climate Change is Here?

Scott Pruitt, Environmental Protection Agency Administrator said, “Harvey was the country’s worst deluge ever and Irma was the strongest hurricane ever to form in the Atlantic.” So are we saying climate change is responsible? Eric Holthaus, meteorologist turned journalist said, “Climate change increases the risk of damaging storms. Obviously, if climate change is warming the atmosphere and increasing its capacity to hold water vapor, that’s going to relate to hurricanes somehow.”

Holthaus continued and said, “The science is pretty clear here: For every degree Celsius (1.8 degrees Fahrenheit) that air warms, its capacity to hold water vapor increases by 7 percent. That’s basic physics. It doesn’t mean it will hold that additional water vapor, but it can. And, often, especially in hurricanes, the air becomes 100 percent saturated with water vapor. If there’s more total water in a hurricane, it’s going to produce more rain.”

In previous blogs, you probably heard me talk about rising sea temperatures and rising sea levels, more than likely caused by the burning of fossil fuels. Hurricanes love warm ocean temperatures. Why? Because this increases the hurricane’s engine, the rapid outflow and inflow of air within its eye and the storm quickly increases in its intensity. Eric Holthaus explained, “The clearest signals are that rising sea levels make coastal flooding worse and that the increasing intensity of heavy precipitation makes inland flooding worse. Coastal and inland flooding are the biggest killers resulting from hurricanes. These impacts are not trivial — even if the changes to sea levels and intense precipitation we’re seeing right now might not be as pronounced as they will be later in the century. This is what scientists mean when they say that the recent storms are harbingers of what’s to come.”

Both Harvey and Irma became category 5 hurricanes. Again, for this to happen you need very warm ocean temperatures. Harvey flooded Houston, Texas and Irma became the size of Texas, as she obliterated Caribbean islands, along with Key West, Florida. She then spread her fury on both the west coast and east coast of Florida, north to Georgia and the Carolinas with her intense rain and wind. Jacksonville, Florida had an incredible storm surge as the St. Johns River crashed over sandbags and sea walls leaving much of the town underwater. Officials there called this flooding “historic,” as “the river hasn’t hit these levels since 1846.”

In my book, Kobee Manatee: A Wild Weather Adventure, I talk about winds from a category 5 hurricane will clock in at “157 miles per hour or higher.” Since both Harvey and Irma were category 5 storms, can we say that climate change was to blame? Eric Holthas said, “There is some evidence that, late this century, wind speeds themselves might increase. Or more exactly, the hurricanes that form are more likely to be stronger. We might have the same number of hurricanes, and some research suggests maybe slightly fewer total hurricanes. But those that do form will have a much better chance at developing into Category 4 or 5 storms. Both Harvey and Irma passed over ocean water that was much warmer than normal, which made it more likely that their intensity would strengthen. So even considering the uncertainties in the data and projections, it’s absolutely appropriate and critical to mention climate change as a factor in these storms.”

As more evidence and news of climate change occurs, I’ll be sure to blog about it for you!

Did “Climate Change” Cause Back-to-Back Major Hurricanes Harvey and Irma?