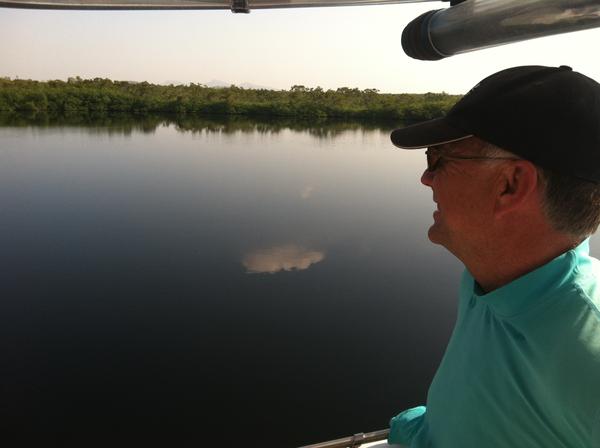 Now that we’re normalizing relations with Cuba, it’s interesting to learn more about the manatees living there. So I received some news from some manatee buddies in the southernmost part of Cuba. It’s called the Island of Youth and this area is about 180 miles south of Key West, Florida.

Manatees are rare in this area and for that matter; they’re rare in Cuba. Why? Because manatees there are hunted for food!  We’re able to get a better handle on manatee behavior in Cuba from Sarasota’s conservation group, Sea to Shore Alliance.  It is the group’s Executive Director, James “Buddy” Powell who, for over 20 years, has been studying manatees in Cuba. He also has formed a close relationship with the University of Havana on manatee behavior there.

Mr. Powell “Buddy” explains, “We’re up the San Pedro River, in a small mangrove creek, surrounded by lots of red mangrove trees. This is an area where we think manatees come up to drink fresh water that’s coming off the swamp. And we’re in a really quiet, still small lagoon. And what we’re looking for are little swirls of water, where a manatee comes up to breathe. And they’ll very often come up here for a period of time and go down into salt water to feed. And so we’re trying to stay very, very quiet, looking for a little nose to pop up or just a slight disturbance on the water.”

Manatee behavior in Cuba is completely opposite the manatee behavior in Florida. In Cuba, as soon as manatees get a hint humans are approaching, they quickly run away. Professor Jorge Angulo, at University of Havana’s Center for Marine Research explains, “Let me tell you, the main cause of death of manatees in Cuba is hunting. People kill them to eat. So seeing that manatees have developed a very shy behavior, so it’s very hard to see. And because they have a very good ear, as soon as they hear any human noise, they’re just gone. So to be able to see the manatees in the wild takes time and skills, and we have learned some of those skills from Buddy. He’s able to spot the manatees in the middle of nowhere.”

“Buddy” Powell adds, “We’re trying to look at the association – do they come here more in the dry season or the wet season? Is this a nursery area? Because the ones that have been caught up here by Jorge… and the team – there’s been a disproportionate number of females and calves. So it might be this is a very protected and quiet area, and safe place for them to come and have their calves.”

Anmari Alvarez Aleman of the University of Havana has been studying the Cuban manatees for over 10 years. She estimates there are between 500 to 1,000 manatees. And Cuba is an island with more than 2,000 miles of coastline!

Anmari explains, “That’s what I want to happen here in Cuba is that people can understand the value of this species, because now unfortunately they are seen as meat, as a source of protein. And they don’t understand how critical their situation is. So I’m hoping in my project to raise awareness through education, so people can see manatees as special animals that they need to protect.”

So as the awareness of this marine mammal grows, hopefully the Cuban people will begin to protect the manatee instead of eating it!

Are Florida Manatees Enjoying Winter in Cuba? (May 7, 2015) http://www.kobeemanatee.com/are-manatees-enjoying-winter-in-cuba/