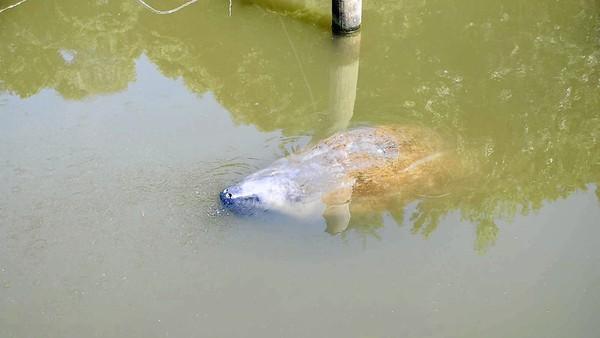 Well it’s now mid-summer and it’s time once again, for some of us manatees, including me, to go out on fun and exciting adventures. So we’ll navigate the sun-warmed waters of the Atlantic Ocean and Gulf of Mexico. And it just so happens I just heard that one of my manatee buddies Chessie, was spotted in the Chesapeake Bay again! According to the National Aquarium in Baltimore, Chessie was seen swimming in the St. George Creek, which is a tributary of the Potomac River. My buddy was seen swimming in the vicinity of Waldorf, Maryland.

Now just to put the distance in perspective for you, Waldorf, Maryland is about 805 miles north of Blue Spring State Park located in Orange City, Florida!

Jennifer Dittmar, stranding coordinator for the National Aquarium in Baltimore said, “I wanted to let you know that the [U.S. Geological Survey] identified the manatee from Wednesday, and it’s a familiar face to us … it’s Chessie!” Chessie hasn’t been seen in the Chesapeake Bay since 2001. The first time Chessie ventured up into the Chesapeake from Florida was in 1994. Dittmar explained that, “Chessie spent about four hours around Flag Harbor Yacht Haven in St. Leonard before moving on.”

Hank Curtis, a resident of St. Leonard who is a part-time employee at Morgan State University’s Estuarine Research Center, said, “It came up about every 10 or 12 minutes for a breath and then just sank back down.” It was the photographs that Hank Curtis took that where actually used to identify Chessie by the USGS.

Cathy A. Beck, who is a wildlife biologist at the USGS said, “Chessie has a very distinct scar, and that’s how we were able to know it was him.” She manages the USGS manatee database, which currently stores more than 2,500 manatee images with distinctive scars used for identification. Beck said, “The creature’s distinct marking, on his left side, is a 12-to-18 inch long gray scar with a white center that is between 1 and 2 inches in length.” Beck continued and said, “Often, the more severe wounds don’t repigment back with the color of the epidermis. The scar was probably created by a boat’s propeller, which is the most common way for manatees to be marked because they swim near the surface.”