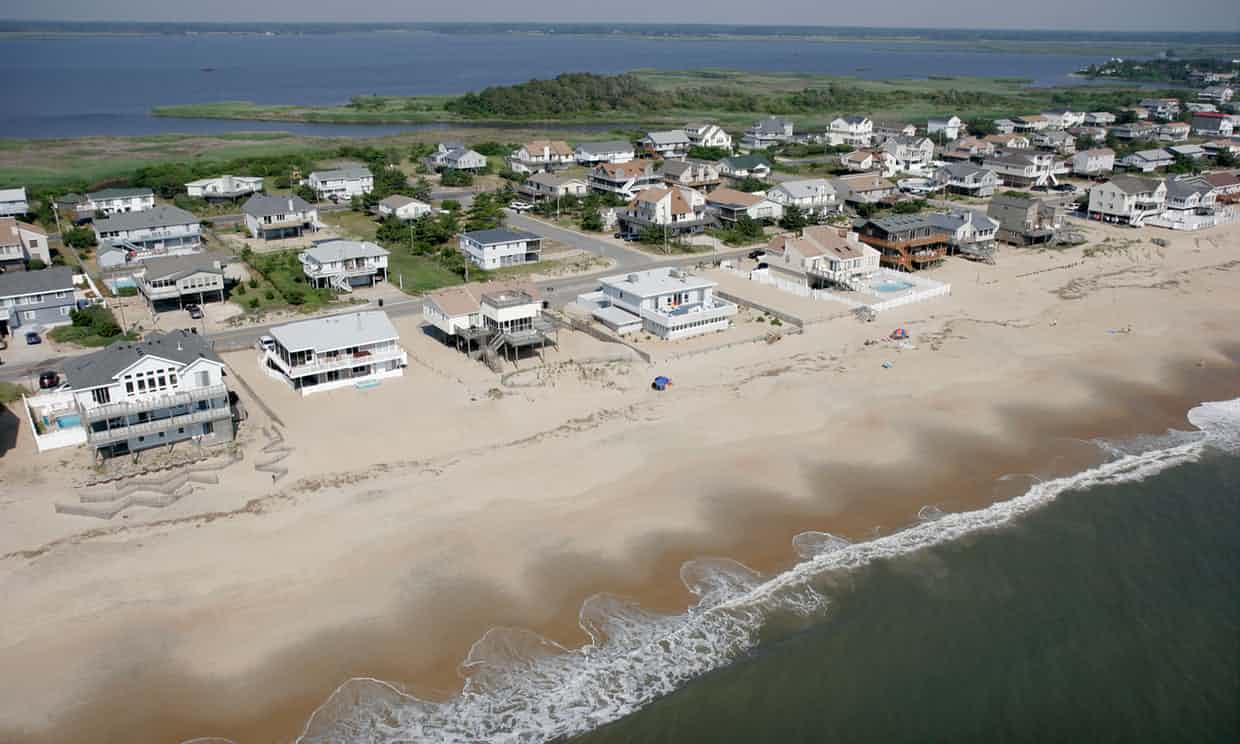 These are oceanfront homes in Virginia Beach, Virginia. Houses like these on the entire US coastline could risk being flooded every two weeks. Photograph courtesy: Alamy

Greetings! Here’s some more sobering news for you regarding climate change. According to the Union of Concerned Scientists (UCS), “Sea level rise driven by climate change is set to pose an existential crisis to many US coastal communities, with new research finding that as many as 311,000 homes face being flooded every two weeks within the next 30 years.” Their report continues and states, “The swelling oceans are forecast repeatedly to soak costal residences collectively worth $120 billion by 2045 if greenhouse gas emissions are not severely curtailed.”

Can you imagine your house being invaded by a climate change type of tsunami every two weeks, flooding your basement, backyard, garage and living room? Kristina Dahl, a senior climate scientist at the UCS said, “The impact could well be staggering. This level of flooding would be a tipping point where people in these communities would think it’s unsustainable.”

Kristina continued and said, “Even homes along the Gulf coast that are elevated would be affected, as they’d have to drive through salt water to get to work or face their kids’ school being cut off. You can imagine people walking away from mortgages, away from their homes.”

The researchers warned these losses would actually multiply “by the end of the century.”The scientists stated, “as many as 2.4 million homes, worth around a trillion dollars, could be at risk. Low-lying states would be particularly prone, with a million homes in Florida, 250,000 homes in New Jersey, and 143,000 homes in New York at risk of chronic flooding by 2100.”

The Housing Market would be affected by diving property prices and additionally, making mortgages default in areas with the most flooding. As a result, flood insurance premiums would skyrocket, as people would be faced with “increasing cleanup costs or retreating to a higher ground inland.”

Rachel Cleetus, an economist and climate policy director at UCS said, “Unfortunately, in the years ahead many coastal communities will face declining property values as risk perceptions catch up with reality. In contrast with previous housing market crashes, values of properties chronically inundated due to sea level rise are unlikely to recover and will only continue to go further underwater, literally and figuratively.”

The UCS reports that, “The oceans are rising by about 3mm a year due to the thermal expansion of seawater that’s warming because of the burning of fossil fuels by humans. The melting of massive glaciers in Greenland and Antarctica is also pushing up the seas – NASA[recently] announced that the amount of ice lost annually from Antarctica has tripled since 2012 to an enormous 241 billion tons a year.”

Are You Ready for Coastal Flooding every Two Weeks from Climate Change?